Sunday 6th November 1302hrs (local time), 1202UTC the start gun will send 29 intrepid solo skippers off on the eighth edition of the Vendée Globe. In a modern age where the pursuit of instant gratification and always-on social interconnection prevails in even the most remote corners of the world, the challenge of racing non stop around the globe without outside help – one person, one boat non stop 24,020 nautical miles Les Sables d’Olonne to Les Sables d’Olonne via the three great capes for somewhere between 75 and 120 days, retains an enduring, magical appeal.

The purity and simplicity of the race remains unchanged since the first edition in 1989 when 13 pioneering soloists started. But it is testament to its incredible magnetism that the race which starts Sunday will be the most international yet as for the first time the challenge is taken up by soloists from the Australasian and Asian continents. Twenty French skippers and nine from Great Britain, Hungary, Ireland, Japan, the Netherlands, New Zealand, Spain, Switzerland and the USA will answer the start cannon Sunday. Ireland, New Zealand and Japan are represented for the first time. The performance and age spectrum of the skippers and their respective IMOCA 60 foot racing yachts has never been greater.

Set on January 27th 2013 by the youngest skipper ever to win the race, François Gabart at the age of 29, the benchmark of 78 days 2hrs 16m 40 secs is thought likely to fall. Since the last race four years ago there has been a technological leap as innovative hydrofoiling daggerboards have been adopted on the IMOCAs of seven skippers. These new foils generate substantial lift on the hull, literally allowing the 7,5 tonne boats to fly almost clear of the waves to sustain speeds averaging 2-4kts faster than their conventional modern generation counterparts. When they were first used in a full ocean racing environment just over one year ago there was a high proportion of mechanical failures associated with these foils. Even after months of further development and reinforcement of the hull structures there are still question marks over their potential reliability and seeming susceptibility to hitting objects.

Briton Alex Thomson on his latest generation Hugo Boss took third place in the last edition of the Vendée Globe race. After numerous failures in different high profile ocean races Thomson’s choice of a solid, slightly older proven design - which he pushed hard and sailed smartly to finish third – this time sees him back to pushing the technology frontiers. His new boat bristles with the latest design interpretations and technology.  He is widely considered a major threat to the top, all-French hierarchy. Last night Thomson and his team sailed one final, overnight testing mission, checking different foil and sail set ups. During the summer his Hugo Boss proved to have race winning potential when he lead the New York – Vendée warm up Transatlantic Race before electrical problems compromised his winning challenge. Since then, despite having to resort to his set of first generation foils after the second generation set failed, Thomson asserts that Hugo Boss is even faster. 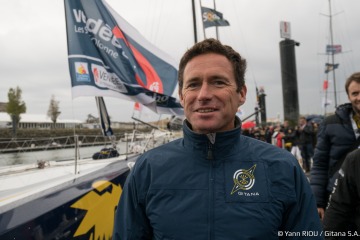 © Yann Riou / GITANA SAEven among seasoned race watchers the perennial question ‘Who will win the Vendée Globe?’ has many different answers. Including Thomson there are six highly experienced, top skippers equipped with foils. Armel Le Cléac’h has finished second in the last two Vendée Globes, only three hours behind winner Gabart in 2013, the conclusion of a mind bending match-race all the way around the world when the two near identical IMOCAs raced all the way as if joined by bungee elastic. Sébastien Josse lead the epic 2008-9 race at different stages before he was forced to abandon with rudder damage. Edmond de Rothschild is the highly optimised, immaculately prepared new IMOCA aboard which he won last winter’s solo Transat Saint Barth’s-Lorient race before finishing second in this year’s New York- Vendée race. His experience racing the Edmond de Rothschild Multi 70 trimaran crewed and short handed has fine tuned his ability to race on the edge for long periods. Jean Pierre Dick on StMichel-Virbac is a multiple winner of big ocean races, such as the Transat Jacques Vabre and two Barcelona World Races around the world. He missed third in the last race when his keel failed 1500 miles from the finish, dropping to fourth. Jéremie Beyou has yet to finish the Vendée Globe despite starting twice. He is the only skipper to retro-fit foils, to his Maitre-Coq, the 2010 launched boat which finished second in 2013 as Banque Populaire.

The only skipper to have won the race before who will be on the start line this time, 2004-5 winner Vincent Riou on PRB, has stayed with a conventional, non foil set up. But his March 2010 launched boat is considered the most optimised, furthest refined IMOCA which possesses a great all round potential. While the foiling IMOCAs are at their best fast reaching in winds over 15kts, they are still felt to have a disadvantage in increased drag in lighter airs and less efficiency upwind. Riou is a firm believer that his choice will give him an at least even chance over the long game. So too Yann Eliès has a well optimised IMOCA with more conventional boards. A three times winner of La Solitaire du Figaro, he returns to the Vendée Globe eight years after being rescued 800 miles south west of Australia. Eliès lay stricken and unable to move suffering from multiple leg fractures inside his yacht for two days before being taken to safety. 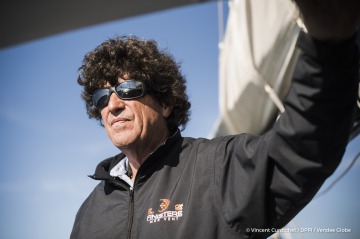 An unprecedented five sailors will be racing the Vendée Globe for their fourth time. Riou, Thomson, Dick and veterans Jean Le Cam and Bertrand de Broc. Two of the 14 first timers will start with realistic aspirations of emulating Gabart’s feat, winning the Vendée Globe at their first attempt, never having raced solo in the Southern Oceans. Morgan Lagravière, 29, is an Olympic skiff sailor turned Figaro sailor turned Vendée Globe racer. He was selected by Safran as the best of the new, younger generation talent to fly their colours and he has a foiling, March 2015 launched design. His programme has been managed latterly by Roland Jourdain’s organisation. Similarly Paul Meilhat’s SMA is the leading IMOCA programme for double Vendée Globe winner Michel Desjoyeaux’s Mer Agitée stable. Meilhat, 34, is also an ex 49er sailor who moved through the one design Figaro circuit, winning the 2014 Transat AG2R.

There are set to be many races within the race as different generations of boats and skippers compete against each other. A posse of skippers with 2006-7 designs are expected to have equally intense, hard fought battles. Tanguy De Lamotte on Initiatives Couer which publicises a charity which provides life saving heart surgery for children, Louis Burton on Bureau Vallée, Arnaud Boissieres on La Mie Caline, Jean Le Cam on Finistere Mer Vent and Thomas Ruyant on Le Souffle Du Nord, are all expected to form the middle and upper middle order of the fleet. 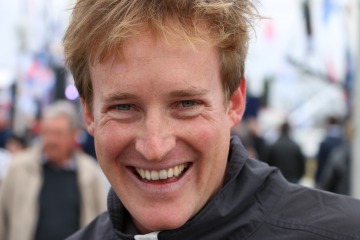 © Guillaume Daumail / M&MThe race has drawn an engaging cross section of adventurous skippers of all ages who set off with the only common theme being their shared dream of finishing the race, completing the circle. Twenty four year old Swiss soloist Alan Roura has a low budget campaign which bottomed out financially when he did not have enough money to put fuel in his team van. Kiwi-American Conrad Colman starts his third round the world race having only just secured a last minute sponsor for his 100% Natural Energy. He is looking to be the first skipper to finish the race using only naturally generated electrical energy. Sébastien Destremau will realise an almost fleeting ambition which only took him over when he was reporting for TV at the start of the last race. Irish businessman, adventurer and sailor Enda O’Coineen on Kilcullen Voyager Team Ireland is looking to fulfil a lifetime ambition but also to spearhead a lasting legacy for Ireland which also encompasses building a sail training vessel and, in the future, a sail training academy. Similarly Holland’s Pieter Heerema is a successful businessman looking to fulfil a sailing ambition, racing a latest generation foiler. Hungary’s Nandor Fa, 64, starts his third Vendée Globe twenty years after his first one, racing a boat he mostly designed and built himself. American Rich Wilson is driven to compete in his second Vendée Globe, the oldest skipper in the fleet, by the burning desire to share the educational values of the race. His Sites Alive program run from on board Great American 4 will reach over 1 million youngsters, including 3000 schools in China, an educational program approved by the French Education Department, and 50,000 students in Taiwan.

Fair weather expected for the start