Conrad Colman will start the Vendée Globe solo non stop round the world race Sunday safe in the knowledge that he will be able to share his incredible story with the outside world thanks to a very last minute sponsorship deal.

Colman, the 32 year old French based soloist who holds dual New Zealand and American nationality has devoted the last dozen years of his life to his quest to compete in the toughest round the world race there is. Despite relocating from North America and immersing himself in the French offshore sailing culture, becoming perfectly bilingual, working in the racing industry in Brittany, building himself a credible racing record including two round the world successes Colman could not attract a major sponsor for his 100% Natural Energy project. But his last minute calls made during the final pre-start week appealed to the London-based Foresight Group. The independent infrastructure and private equity investment managers, the renewable energy market plays a significant role in their investment strategy. Foresight started investing in the solar sector in 2008 and is now the second largest solar asset manager in Europe.

The company proved able to respond quickly, making their positive decision only on Wednesday. Their branding for Colman’s IMOCA was made up in England by Thursday and driven overnight to Les Sables d’Olonne yesterday. Speaking after the final weather briefing, less than 24 hours before the start of the 24,020 nautical miles race, Conrad Colman said: “It speaks testament to the value of the project we have created and also the power of the Vendée Globe, a spectacle that will reach millions of people around the world and I am delighted that Foresight, a company that comes from outside the world of sailing, can see value for them. Foresight invest in green energy companies and so it is particularly satisfying that I am being supported by company which shares the same values as me at the heart of their business. They have significant investments in solar and recycling and renewable energies. Now we have the means to communicate, to participate fully in this race and to share the adventure with the world. We have a great company behind us that have invested in our story.” 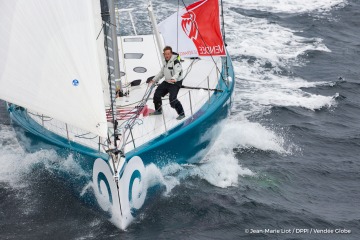 Speaking on board Foresight Natural Energy Ben Thompson, Group Marketing Director of the Foresight Group, explained: “Conrad’s story interested us immediately. It came out of the blue, a genuine story of a skipper needing funding to complete the course with full communications in order to tell the story. We are a global company, increasingly global, with a focus on renewable energy and infrastructure. The alignment with Conrad’s attempt to go around the globe without a diesel engine, relying on solar and hydro power, with an energy storage system which is a part of energy infrastructure that we are pursuing, all ticked so many boxes. We made our decision late on Wednesday, commission the boat branding Thursday, drive through the night to apply it yesterday and today. We as a company are expanding globally. The global nature of the Vendée Globe fits with our ambitions as a company.”