The skipper of PRB hit a UFO on Sunday morning, while speeding along with the frontrunners in the Vendée Globe on his way towards the Cape of Good Hope (a different incident from yesterday’s, when his rudder kicked up). Following on from this collision, Vincent Riou did not initially notice any damage and was able to continue to sail normally. It was only three hours later that the keel started to vibrate and emit loud noises, indicating there were huge strains on the appendage. These sounds continued to grow during Sunday night.

Taking into account the weather conditions (25 to 30 knot winds with average speeds around 19-20 knots), Vincent was unable to go and check the keel housing, but informed his shore team of the incident. The PRB team and the boat’s designers (Guillaume Verdier) and the structural calculations team at HDS GSEA Design (Hervé Devaux and Denis Glehen) began to study all the hypotheses based on what they knew (essentially the type of noise coming from the keel).
It was only this morning while sailing in calmer conditions that Vincent was able to carry out the necessary checks. He discovered that the axis of the keel had been damaged in the collision. This titanium part is an essential element on the boat. It allows the keel to be attached to the monohull with a plastic ball joint and it is also this axis that allows the keel to be canted.

When the incident occurred, the plastic ball joint broke leading to permanent wear between the keel axis and the ball joint attachment. In the longer term with the Indian and Pacific Oceans and the climb back up the Atlantic ahead, that means that the integrity of the boat is in danger or even that the keel could break away from the 60-foot boat.

This is a huge disappointment for the winner of the 2004 Vendée Globe. He saw his dream come to an end four years ago (almost to the day) after a collision with a UFO. He set sail from Les Sables d’Olonne on 6th November hopping to keep up with the new boats fitted with foils. This was successful, as PRB has always been up there with the leaders. For a long time neck and neck with Banque Populaire, Vincent was even in second place on several occasions and had an exceptional voyage down the Atlantic aboard his boat fitted with daggerboards. This performance earned him the congratulations of many observers, and gave him hope for the rest of the round the world voyage.

The skipper of PRB is currently sailing in decent conditions (14 knots of wind) and Vincent is not in danger. He is in contact with his shore team to decide where he may stop to repair his monohull before heading back to France. This will probably be Cape Town in South Africa. 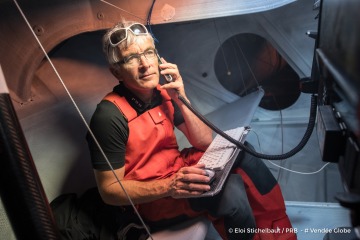 This is a huge disappointment. But as every time, life goes on and for me that means bringing my boat back safely to land somewhere. On Sunday night something hit the bulb. The keel started to vibrate. It then started moving from side to side. That soon stopped. It was not immediate as the boat was going at 25 knots when it happened. I didn’t think much about it. The keel often hits things in ocean races and this bang wasn’t that big.

Later that night, I started hearing cracking noises around the keel. The sort of noise I had already heard, as I had already had noises from the carbon rubbing between the keel and the hull. I said to myself that there was some friction, but that it wasn’t serious. But gradually the noise grew louder. I started to ask myself questions, and think about what may have happened. I started to consult others. (…). We weren’t that worried, but not that relaxed either, as it is not an easy place to get to in the boat. Without removing the keel, you can’t really see what has happened. So what I did was to say I would continue. It could have been a small move by the keel and the carbon will be rubbing on the hull, meaning the noise should fade away. Or it was something more serious with damage to the bearings and then the noise would increase. I continued to sail for 24 hours. The noise continued to grow until late yesterday, when I started hearing metallic sounds as well as noises from the carbon. I could se that the bearings were damaged and that it was beginning to affect the housing around the bearings.

I contacted the people, who worked on the boat. They tried to figure out what might have happened. They came to the same conclusion: in the short term there was no risk, as these are large parts, but this metal against metal rubbing could lead to more serious damage. It’s hard thinking about sailing around the world with damage like that.

This morning, the weather eased after the front went over. I was able to open the keel housing and feel around inside. I could feel that the keel was moving. Around the front bearings, the hole was bigger than the axis of the keel. That only confirmed my fears about damage to the bearings.

I don’t know what to think. This damage happened at almost the same point as the damage four years ago. When I passed Salvador a few days ago, I spent the night thinking about that. As I had passed Salvador, I told myself that I had got rid of my demons. And then just as 4 years ago in the same place, 14 days after the start we collided with irreparable damage being done. It’s hard!

The simplest thing is to head for South Africa, Cape Town. I’m currently checking to see if they have all I need there. We’re sorting things out with the team. I’m thinking about all those, who have been with me and following me since the start. I know there were a lot of people behind us. I’m really thinking of them. I’m disappointed about what has happened, but I’m disappointed for them in particular.”

Jean-Jacques Laurent, President of PRB: “Vincent retiring is a huge disappointment of course. He has had an incredible race since the start in Les Sables d’Olonne racing against boats from the latest generation. He got us dreaming. The whole firm was following him and passionately supporting him. Unfortunately, once again it is a UFO that has blocked him. We went through that 4 years ago. It’s hard accepting that sort of thing over and over again. But we are fully behind Vincent’s decision, as once again, he is reacting as a good sailor. The main thing is making sure he is safe and can bring the boat home safely. That is why he has taken the right decision.”