Unprecedented footage of the Vendée Globe frontrunners smashing through the Southern Ocean has been captured on camera for the first time in the solo round the world yacht race's 27-year history. The stunning images of French sailor Armel Le Cléac'h and Brit Alex Thomson as they passed the Kerguelen Islands deep in the southern Indian Ocean were filmed by French television station TF1.

The broadcasters were filming from a French navy helicopter that had taken off from the frigate Nivôse which is patrolling French territories in the Southern Ocean. The rights-free footage, available to download from the Vendée Globe media server, shows race leader Le Cléac'h on his boat Banque Populaire VIII and second-placed Thomson on Hugo Boss blasting along at speeds of more than 20 knots in winds of between 25 and 30 knots.

Both skippers are sailing cutting-edge 60ft raceboats fitted with special hydrofoils that help lift them partially out of the water to reduce drag and therefore increase speed. Thomson, 42, the only British skipper among a field of 29 starters, suffered damage to one of his two foils earlier in the race when it was broken off in a collision with an unknown object.

Speaking to race HQ yesterday, Thomson said the arrival of the TV crew had been a welcome distraction from racing in such isolation. “I had about 25 – 30 knots, and the sea state was really horrible - very grey, bloody freezing, so it was a nice distraction for the helicopter to come,” Thomson said. “The pilot did a nice bit of backwards flying while he was doing some filming when I had the Union flag out, so I thought it was really cool actually, it was a really nice thing, and to whoever organised that I'd like to say thank you very much, much appreciated. The sails I had up were two reefs [in the mainsail], a staysail, and a fractional zero.  I think I was averaging 21.5 knots, so top speed was possibly 28, and down as low as 17 probably. I was averaging about 21.5, something like that, so not too bad for a non-foiler. It was nice to see people in the helicopter, that was interesting. It was good to have some other people around.”

The Vendée Globe began in Les Sables d'Olonne, France, on November 6. Competitors race solo around the world via the Cape of Good Hope and Cape Horn before returning to Les Sables – a journey of around 25,000 miles. The leading pair were split by just 18 miles this morning after more than 9,000 miles of ocean racing. Thomson said he was relishing the battle with Le Cléac'h, but was also pleased to have him nearby should anything go wrong onboard.

In 2006 Thomson's life was saved by fellow Brit Mike Golding during a round the world race after the keel on his boat broke off in the Southern Ocean. “It's good to have Armel there as a pacemaker, someone to be able to measure yourself against,” Thomson said. “I think it makes us both faster. As well as that there's the safety, obviously. I was in a similar situation in 2006 with Mike Golding. My keel broke and by the time I needed to abandon the boat he was 100 miles down the track, and all credit to Mike he turned his boat around, put three reefs in and a foresail up and came back and saved my life.” 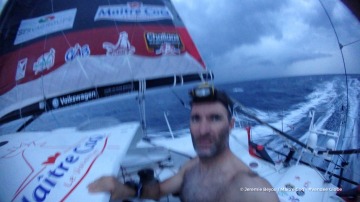 Jérémie Beyou (Maître CoQ): “The wind is a bit steadier, but I have quite a few problems aboard. Since yesterday my big gennaker has been stuck at the top. I haven’t managed to bring it down, as the hook has jammed. For the moment, it is furled at the front and is not unrolling, but it means I am losing speed and above all I’m praying that it doesn’t unfurl. I’m going to have to climb the mast, but I don’t think I can do it today. On top of that, I still don’t have any accurate weather forecasts, because my Fleet system is not working. I just got the gale warning from the Race Directors, so I’m going to have to put my foot down to get ahead of the low. I don’t know if there will be any break in the weather to solve this problem. It’s stressful, as if the gennaker unfurls in 40-50 knots, I have no idea what could happen.” 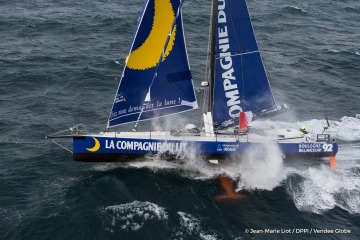 Stéphane Le Diraison (Compagnie du Lit-Boulogne Billancourt):”We’ve gone from one extreme to the other in a short space of time. Yesterday we were in the high. I’m now ahead of the front and things are starting to get rough. The wind is strengthening and the seas are building and the sky is clouding over. There is definitely a low out there. Currently I have a 25-30 knot NW’ly. I have taken in a second reef and am expecting to surf along at 24 knots at times. I’m finding it hard to sleep, because the boat is so fast and there is an incredible amount of noise. IMOCAs are boats that are noisy, shake you up and sound as if they are cracking. In a couple of days, I’ll probably have got used to it.”