French sailor Yann Eliès was today doing all he could to slow his 60ft raceboat in a bid to reduce the impact of a violent Southern Ocean storm heading straight for him.

Vendée Globe veteran Eliès, currently in sixth place, has found himself right in the path of the volatile depression which has formed quickly to the south of Madagascar. Just over 300 nautical miles ahead, Eliès's closest rivals Jérémie Beyou and Paul Meilhat have been able to sneak in front of the system, which is moving south east at speed. But a high pressure system directly to the north of Eliès's boat Quéguiner-Leucémie Espoir has quashed any hope of him from skirting round the top of the depression. With the worst of the wind – potentially gusting beyond 50 knots - due to hit in around 36 to 48 hours Eliès was today taking his foot off the gas to avoid becoming trapped in the eye of the storm. To make matters worse another depression is forming to the south, and there is a possibility the two systems could merge.

In a call with the Vendée Globe headquarters in Paris today Eliès revealed he considered seeking shelter behind the Kerguelen Islands some 500 miles south east but dismissed the idea for fears of the shallower waters seas becoming too rough. “I’m going to have to do a lot of thinking to work out how to deal with the storm on Sunday,” said Eliès, 42, who had to be rescued in the 2008 Vendée Globe when he broke his leg. “I can’t continue on my ideal route. I can’t get ahead of it, so I may have to slow down and let it go by. I have to get the timing right. There’s warm air coming down from Madagascar meeting cold water with the sea temperature around 3.7 degrees. The low may merge with another low coming up from the south to create a really nasty storm. I did think about sheltering in the Kerguelens, but it’s too risky with the continental shelf off the islands.”

“I would like to have winds of less than thirty on the charts, as above that you often get 45-knot gusts. Behind the low, there will be squalls, but I hope to avoid them. However behind that there is another one, so I am avoiding going too far south. I need to avoid the areas where the waves are bigger than six metres as that is a risk for the boat. I slowed down deliberately this morning. There are times when you have to put the race itself to one side, even if that’s hard to do.” 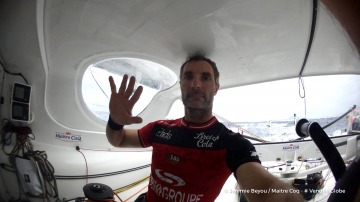 Beyou meanwhile was breathing a sigh of relief after outrunning the storm as well as solving a potentially devastating problem with his gennaker. Yesterday Beyou reported that the sail had become stuck at the top of Maître CoQ's mast, and although furled it could have ended his race if it were to come undone in big breeze. However Beyou's team today said the 40-year-old French skipper had resolved the issue without having to climb the mast, which is in itself one of the most dangerous tasks onboard. 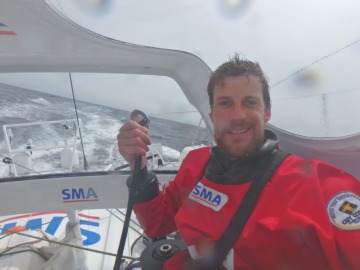 © Paul Meilhat / Vendée Globe / SMABeyou and Meilhat have been practically inseparable since the solo round the world race began on November 6, and after nearly sailing almost 9,000nm from Les Sables d'Olonne in France the pair were today split laterally by less than 10 miles. “The battle with Jérémie is good for inspiration,” added SMA skipper Meilhat, the leading non-foiler. “It's hard when you're alone - you don't want to go outside and change the sails because you're tired and it's cold. But when you've got a boat just behind you or in front of you it gives you power to push hard, change the sails and trim them whenever you can. I'm very happy to have Jérémie here.”

At the front of the fleet British skipper Alex Thomson maintained a lead of 18 miles over second-placed Armel Le Cleac'h.

Tune into the Vendee Globe Live show at 1200 UTC tomorrow when host Andi Robertson will be joined by French sailor Charles Caudrelier, 2011/12 Volvo Ocean Race winner and skipper of Dongfeng Race Team for the upcoming edition.

Quotes
Paul Meilhat (SMA): “I find it hard without foils because we have lots of different conditions and sometimes Jérémie is faster. Sometimes I have the better sails and I'm faster than him. I'm happy about the sails that I brought on the boat. We chose different sails to Jérémie – he has a Code 0 and I have a blast-reacher. How I'm feeling depends on the day – sometimes it's hard because I'm thinking about my family and my bed, somewhere dry and warm. But I have really good days too. I'm really happy to be here, the competition for me is important, so to be in a battle for fourth place is great. And I think that's enough to make me happy.” 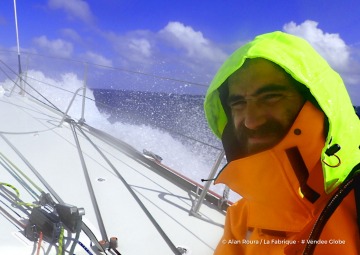 Alan Roura (La Fabrique): “We're about 38 degrees south and the last few days have been really tough – very rough and windy with big waves. It was quite stressful. Now we've got two reefs in the mainsail and the J2 up so there's less wind but we've still got good speed. We've hit 25 knots surfing. For the moment the boat is still in pretty good condition and everything is working. I'm happy to be here because in three days I'll be passing the Cape of Good Hope and that is just amazing. I enjoy these conditions – the waves are pretty high though so it's pretty difficult on the boat, it's a bit more like a submarine actually.”