Kito de Pavant, the 55 years old French skipper of Bastide-Otio, who suffered damage to his keel when racing in the remote South Indian Ocean while racing in the Vendee Globe solo round the world race, was successfully recovered from his stricken yacht around 0100hrs TU this morning and taken aboard the research and supply ship Marion Dufresne II approximately 110 miles north of the Crozet Islands. The solo skipper was immediately assessed by the ship's doctor.  De Pavant is uninjured but is extremely tired and disappointed.

The vessel which supplies the French territories in the Southern Ocean and Antarctic was on a mission from Reunion Island touring around the southern islands. Captain Dudouit was informed of the situation by the Vendée Globe Race Directors in collaboration with the MRCC and rescue centre at Gris-Nez. Around 110 miles north of Kito de Pavant’s position, the Marion Dufresne accelerated to reach the monohull as quickly as possible, as her keel threatened to drop off at any moment endangering the life of the skipper. As night fell in the area, the vessel reached Bastide-Otio at around 1530 UTC and established radio contact with Kito de Pavant, who described the situation, with winds still blowing at around thirty knots and on very rough seas.

Captain Dudouit (Marion Dufresne II): “We picked up Kito de Pavant with our rigid inflatable this morning, in spite of the weather remaining fairly rough with force 6-7 winds and huge waves. We were able to launch the inflatable and took him off his boat. We were on a supply mission in the southern islands, which is our usual job in December. We left Reunion Island on 2nd December. The MRCC tried to contact me, but could not get through and so it was via the safety centre in Marseille that we got into contact at around 0900 UTC on Tuesday. At that point we were around 110 miles north of the boat’s position. We moved to maximum speed. In spite of the weather conditions, it took us less time than forecast to get into contact with the skipper. We reached the area at around 1530 UTC, as night was falling.

We were in visual and VHF radio contact with Kito de Pavant, but as it was growing dark and the weather was still rough, it was not possible to act immediately, and in any case, the skipper was in control of the situation on his boat. We jointly agreed to wait until daybreak to launch our rigid inflatable boat to take him off. He described the situation to us: he had controlled the ingress of water and we agreed that if his boat capsized after losing her keel, we would recover him from his life raft. We remained in regular contact with him, which allowed him to get some sleep. This morning the situation started to worsen, as the water level had risen. Kito de Pavant was therefore directly picked up by our rigid inflatable and taken aboard the Marion Dufresne II. He was tired and above all very disappointed to have had to abandon his race and his boat. The ship’s medical officer is taking care of him.” 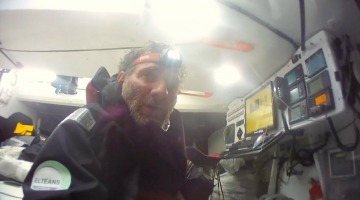 © Kito de Pavant/ Vendée GlobeKito de Pavant (Bastide-Otio): “I was lucky with my bad luck. The Marion Dufresne was in the area and that only happens four times a year… The conditions were nasty and late in the night, I was no longer able to get rid of the water. The boards were floating. It was hard leaving my boat and abandoning her in the middle of nowhere, and it’s really upsetting losing my boat. But that was the only solution, as I no longer had much energy left for the pumps and I was unable to recharge the batteries, as the engine was under water… A large section of the hull has been damaged, as the bottom of the hull went with the aft keel mountings. The keel ram ripped through more than a metre of the hull. It was sickening to see the boat in that condition. It was getting too dangerous for me…

So now I’m on the Marion Dufresne II on her way towards the Crozet Islands and then the Kerguelens and Amsterdam. I’ll be staying on the French supply ship for three weeks. I don’t know this part of the world, but I’ll be doing the tour of all these remote islands.

It was a very violent smash. I was doing between 15-20 knots in 25-30 knot winds on heavy seas. I was being cautious and not too fast and well away from the direction of the wind. I hit something, but I don’t know what. I heard a big bang and I immediately thought it must be something hard. But when I looked behind the boat, I couldn’t see anything. What I heard must have been the crash into the boat… The smash broke the aft part of the keel and hull around it and the aft keel mountings were ripped off too. When I went to look, the keel was still hanging there, but by the time I had furled the staysail (J-3) to slow the boat down, the keel had dropped around four inches. It only got worse. There was nothing I could do. I changed tack to head northwards, but I quickly understood that the boat could no longer advance. I lowered the mainsail and called the Race Directors. 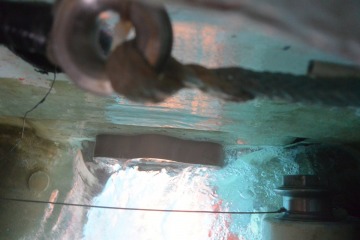 The Marion Dufresne was fortunately 110 miles north of me. The other possibility was Louis Burton, who was two days away from my position. He would only have got to me tomorrow morning. It’s horrible leaving the boat like that and I have lost a lot and there are some very serious consequences. It’s the first time I have lost a boat. In terms of how I feel, it has hit me hard, but physically I’m fine.”

Jacques Caraës (Vendée Globe Race Director): “Kito, I fully understand your disappointment. We were extremely relieved to see that you had managed to control the situation when we had you on the phone. It was a very important moment finding out that you weren’t overwhelmed by the stress with such serious damage in that remote location. We were able to stay calm thanks to you. Thank you. We’re really thinking about you.”