The skipper of Compagnie du Lit/Ville de Boulogne-Billancourt looks at the circumstances, which led to his boat dismasting on Saturday evening. Stéphane Le Diraison is expected to take over a week to reach Australia under jury rig. He explains how he reacted in these nasty conditions.

“I was inside the boat. I went surfing along at 28 knots and heard a lot of noise. I thought it was an outrigger, and rushed outside in my socks, as I was inside trying to sleep… I grabbed the helm and saw that I didn’t have any mast. It was a huge shock, as there was nothing left. Usually when masts break it is at the level of the first or second spreaders, but mine broke at deck level right at the bottom. The mast was in pieces on the deck with bits of carbon everywhere. A three metre long piece was cutting through the deck with its spreaders. All the sails (Jib top, J3, mainsail) were in the water and pulling down. I cut all the stays to allow this to float behind like a floating anchor. I tried to get the gennaker back, but it was impossible. The seas were huge with breakers. My boat kept getting stopped by these breakers and the water was above the guard rail flooding the cockpit. It was impressive. I was clipped on in the stern. I tried to lift up my sails, but it was too risky, so I let everything go. That really hits you hard… It’s so tricky finding the funding to pay for a set of sails and when you see them drift away liker that, it really gets to you. Particularly seeing everything was fine on board before that. I’d coped with a rough Indian Ocean. A couple hours before I was telling them at Race HQ that everything was going well.”

“I motored for three hours and tried to eat and sleep after so much effort to secure the boat. I then put on my foulies to go out on deck to clear things up. I’ve never found anything so hard in my life. There were 35 knots of wind and cross seas in the front. I was frozen and the boat was getting tossed around in spite of weighing 9 tonnes and measuring 60 feet. My first analysis showed that the dismasting was due to a backstay padeye breaking. I don’t know why that happened. It shouldn’t have broken, especially seeing we changed the part just before setting off. There’s nothing left on the deck. Not a single cable. The lifelines got ripped off and it’s quite dangerous now, so just as well I decided to clip on.”

“I spent twelve hours cleaning everything up. I found a way to set up a jury rig. I now have a 7m mast and it’s fantastic. I don’t think this one will come down. I hoisted my storm sail to get north as quickly as possible and away from the ice zone, where I was drifting. I was completely exhausted and you really have to dig deep to find the inner strength. Firstly I had to look after myself, as I was drifting in the Southern Ocean not far from the ice, which means it wasn’t very comfortable psychologically.” 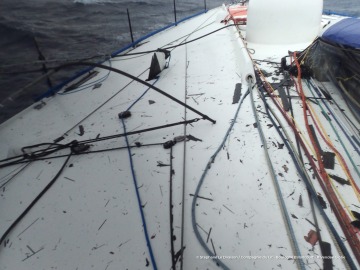 “The first punishment is my Vendée Globe has come to an end, after things were going so well. I would have preferred it to have been my mistake messing up a gybe or choosing the wrong sails or being too aggressive. But that wasn’t the case. I had the right sails and was sailing wisely and calmly. It was just bad luck… so is very frustrating. The second punishment is what I have had to go through in the past few hours, the worst in my life It’s not over yet. I managed to set up a jury rig, but now I need to get to Australia which is a thousand miles away. My third punishment is that I shall end up in Melbourne right on the other side of the world from Lorient, so I have a heap of logistical problems to deal with. I am now motivated to come home, but it’s not going to be easy. But that is part of the Vendée Globe – a real maritime adventure and I can tell you that the adventure continues. I’m on a wounded boat and not able to manoeuvre well, so it’s not exactly safe.”

“People often talk about jury rigs, but when you get involved alone on a 60-foot boat, it’s not easy. I’m proud of being able to get back heading north 15 hours after the incident. It’s true that it’s better to complete the Vendée Globe, but if you look at the race course, what we come here for is also excitement and the need to take up a personal challenge. These past few hours in a disastrous situation without help correspond exactly to that spirit.” 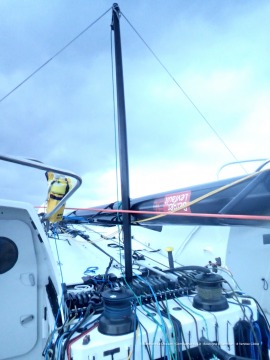 Unable to use his hydrogenerators at such low speeds, Stéphane wanted to start his engine to charge his batteries but the alternator burnt out. Compagnie du Lit-Boulogne Billancourt is this morning sailing at reduced speed towards Melbourne (Australia): a little over 3.5 knots, which must feel odd after the averages in excess of fifteen knots in the Indian Ocean.  At around a hundred miles a day, it should take between a week and ten days to complete this voyage back to civilisation.