The Horn, the legendary rock! The rock at the tip of South America at 55° 58’ S and 67° 38’W.  Cape Horn nicknamed the Hard Cape has only existed since the 16th Century, when Sir Francis Drake rounded it in 1578.   He gave his name to the Passage separating Tierra del Fuego from Antarctica, which stretches out with the Graham Peninsula and the South Shetland Islands, meaning that there are only 550 miles separating the two continents.  However, the passage was kept a state secret  by the Admiralty, until the Dutch, tired of the trade monopoly imposed by the East India Company, which controlled the Magellan Straits, fitted out two ships under the command of Willem Cornelisz Schouten, financed by Jacob Le Maire.

The Eendracht (360 tons, 65 men, 19 cannons) and the Hoorn (110 tons, 22 men, 8 canons) left Texel on 14th June 1615 to find a way through other than the Magellan Straits (1519), named after the first European to discover the Pacific.  The Hoorn disappeared in a fire off the coast of Patagonia, but the Eentracht succeeded in her mission: "In the evening [25 January 1616] the wind was from the South West, and that night we went South with great waves or billows out of the southwest, whereby we judged, and held for certain that ... it was the great South Sea, where we were glad to think that we had discovered a way, which until that time, was unknown to men, as afterwards we found to be true. We saw land again lying north west and north northwest from us, which was the land that lay South from the straits of Magellan which stretch Southwards, all high hilly land covered over with snow, ending with a sharp point which we called Cape Horn [Kaap Hoorn]."

Gradually colonised, South America was under Spanish control, from the Isthmus of Panama, but the English conquered the extreme south in the early 19th Century principally on the west coast of Chile.  They discovered it was faster and safer to sail by sea than by land to go from one side of America to the other to reach Valparaiso, the new El Dorado on the American continent.  In sixty days, a cargo could be there from London.  In 1848, a pioneer, James W. Marshall, discovered gold near Yerba Buena, which was renamed San Francisco… 4000 kilometres from New York. Lieutenant Beale brought the news back to the east coast taking five months to pass through the dangers of the Far West : Indians, deserts, mountain chains, huge plains! Sailing there was much quicker: 14,000 miles via Cape Horn.

Everything that floated from Boston down to New Orleans was commissioned to transport gold diggers and their supplies. From forty boats anchoring off San Francisco in 1848, the traffic went up to 775 ships the following year, with boats of all shapes and sizes.  in a year, more than 90,000 people had emigrated to the other side of America via The Horn!  The Gold Rush was so big that soon there were not enough ships.  So the rich merchants in Boston set about building new ones in record time.  We thus saw the birth of the finest sailing vessels, the clippers including the Flying Cloud, which took only 89 days to sail between New York and San Francisco in 1854, a record that was to remain in place for 135 years!

Some boats ended up on the beaches by the Golden Gate, as the crews had only one thing on their mind: digging for gold. The captains remained on board as they were paid 300 to 400 $ a month, and also received 5% of the freight and ticket prices, 25% on cabin prices and two cents on each letter transported. Then, there were the bonuses and wagers  between captains at the Astor Bar in New York!  But the problem was the return journey: sometimes the sailors paid twelve dollars a month for the trip out refused to sail back even for 150 dollars.  Shanghai crew were common: men passed from bar to bar to get the crews drunk and sign up, before forcing them aboard for China (Shanghai),with the return voyage being used to transport tea or silk before heading for London or Boston via the Horn.

From target to obstacle

The first voyages tended to be from the Atlantic to the Pacific, or in other words against the prevailing winds.  It took the 19th Century sailing vessels days or weeks to pass the rock in mountainous seas and storm force winds: blocked by the Andes in the north and by Antarctica in the south, the lows are squeezed through the Drake Passage in a funnel with the waves building on the shelf  like a tsunami.  It is common to find ten metre high waves and many thought it would all end there: Bruno Peyron and his crew in the first Jules Verne Trophy in 1993 had to lower all their sail  and pray to avoid being smashed on the Ildefonso Islands, Diego Ramirez, Hermite, Herschel… which are scattered along the coast before the Horn.

However, the most famous Horn rounding was Edward Sewall's ship in 1904, which took 67 days to round the headland tacking desperately between Tierra del Fuego and the Antarctic. As for the three-masted Garthway, unable to do anything other than run free, she headed east and reached Chile by sailing all the way around the Antarctic! Some captains padlocked the halyards to stop the sailors reducing the sail, as they wanted to sail as quickly as possible to the other side of Tierra del Fuego to get the most for their cargo.  The freight was worth as much as the clipper, around 70,000 $!

It was not until the late nineteenth Century that someone came up with the idea of sailing the right way around the cape after rounding the Cape of Good Hope and Leeuwin. Since Joshua Slocum, only a hundred or so solo sailors can boast of passing the black rock, with the lighthouse perched a few hundred metres up,  which looks so cold and sinister in the mist and snow.  To call yourself a Cape Horner, it is not a question of simply placing your windsurfing board off the rock to round it or of simply paying your ten dollars and climbing aboard one of the many steamers to get your passport stamped by the lighthouse keepers: you have to sail miles, spending weeks or months in the swell of the southern seas.

Being  a Cape Horner also means "pissing in the wind" and "spitting in the sea". In the first case, the purpose is not that clear, as urinating in battle gear is already difficult enough. As for trying to add some water to the ocean by spitting, apart from the obvious difficulty, the challenge simply seems to be a mystery.  Some believe it necessary to pierce their ear with a  gold ring (as large as possible), giving themselves that pirate look.  Maritime history does not seem to have recorded this strange piercing as in any way linked to rounding the Horn.  For the pirates it was considered as a way to improve their sight.

The Horn and its seas

When you have zig-zagged between the ice, tacked between the lows, slalomed between the breakers, reeling from tiredness, shivering with the cold and wind, the Horn is seen as the way out.  You hope to get there as soon as possible, but fear its difficulty. Will it be quiet or will the demons appear.  There have been some famous calms for some voyages around the Cape, and some incredible journeys like VDH's on his round the world voyage against the prevailing winds and currents.  He rounded the Horn sailing downwind in a 35-knot easterly. Then there was the icy rounding upwind by Olivier de Kersauson and his crew  in a cold southerly, which froze the halyards… Some sailors have even preferred to turn around off Tierra del Fuego as they did not like the cold temperatures.

In a few hours from now, the first Vendée Globe boats will be rounding the Horn. It will have taken just over a month from the Cape of Good Hope, while the tail-enders will have spent around eight weeks in the south before they find the way out. Afterwards, the long climb back up the Atlantic means they will be sailing towards warmer conditions.   It will be over for temperatures of around 3° and the stress of the storms in the south and the nights on the foaming crests. A moment of relief… Horn sweet home, indeed. 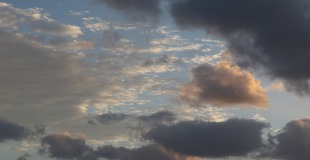