As the two longtime leaders of the Vendée Globe approach the Equator, Armel Le Cléac'h has started to slow down as he starts to feel the effects of the lighter winds of the Doldrums. The trade winds are diminishing for the French skipper of Banque Populaire VIII who has less than 200 miles to sail until he crosses back into the Northern Hemisphere and since last night his British rival Alex Thomson (Hugo Boss) has regained about 20 miles to be 322 behind on the 0400hrs UTC ranking this morning. The British skipper was averaging almost 23kts to the Frenchman's 18.3.

The Inter Tropical Convergence Zone, or Doldrums, are not looking too promising for the duo who had a dream southbound passage, crossing the Equator on 15th November in a new reference time. The Doldrums are increasing north-south and are already evident at the latitudes of the the north of Brazil. And once across the Doldrums, the NE'ly trade winds are disrupted by a depression between the Azores and the Canary Islands. The St. Helena high is relatively slack and benign and thus does not propagate the usual trade winds.

In third place, 770 miles south of Thomson, Jérémie Beyou (Maître CoQ) is now sailing in an easterly trade wind but it is not strong enough for him to make the most of his foil. So too for fifth placed Jean-Pierre Dick (StMichel-Virbac) who is struggling in light winds and he is being caught by the fifth and sixth placed conjoined twins,  Yann Eliès (Quéguiner-Leucémie Espoir) and Jean Le Cam (Finistère Mer Vent) who are sailing within sight of each other and are getting around JP. All three are gradually entering the area of high pressure, sailing upwind in a northerly which will weaken today. There are likely to be regular changes in the rankings as they deal with calms, tacking occasionally as they climb towards the St. Helena high.

In seventh place in the South Atlantic, Louis Burton (Bureau Vallée) is in a transition zone between two low-pressure systems to the north of the Falklands but he should soon pick up a good NNW’ly airstream to climb rapidly to Cape Frio. Burton should narrow the gap to the three in front of him. Nándor Fa (Spirit of Hungary) has finished with the headwinds and can beam reach faster to cover the 850 miles from Cape Horn which he is due to round this weekend. The Hungarian skipper will then leave behind him the icy Atlantic waters where two icebergs have been spotted just to the north of the exclusion zone.

Further back, the pack is stretching out in a high slowing down all six of them. Fabrice Amedeo (Newrest-Matmut) was down to two knots in the centre of this system, while Didac Costa (One Planet-One Ocean) and Romain Attanasio (Famille Mary-Étamine du Lys) are getting closer and closer with just forty miles separating them. On the back of a low-pressure system, which is also affecting Pieter Heerema (No Way Back), they are sailing due east towards the Horn. Finally, Sébastien Destremau (TechnoFirst-faceOcean) is still stuck in Esperance Bay with headwinds in Tasmania, which are preventing him from leaving the narrow channel. 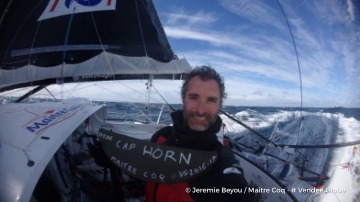 Jérémie Beyou (Maître CoQ): “It’s looking fairly simple now to the Equator. It’s still complicated communicating and getting weather files. I’m now in the easterly trade winds, which should strengthen a little. I’m not complaining as everyone seems to have their little problems, but I now only have my third wind instrument working. The first failed a few days after the start and the second three days ago… It’s a bit complicated as it is only a metre above the deck, so I regularly have to put the autopilot in compass mode, which means I have to spend more time in the  trimming the sails and changing course, but I’m making headway and am still in third place.”

When a victory is staying on course

Vendée Globe 2020: Boris Herrmann, the first German to compete in the Everest of the seas