> News > Reasons to feel down in the Doldrums

Even if you have been through it dozens of times, this zone is never the same. Usually, it is close to Africa near Sierra Leone with a narrower and narrower strip stretching out to Brazil. This means that to get back to Europe, it is usual to cross at around 32°W. This time a low-pressure system off Madeira is creating an unusual situation in the North Atlantic and it is only gradually filling. The trade winds are therefore shut off between the Canaries and the Cape Verde Islands, and pushed right across to French Guiana. This weather pattern is set to remain in place for several days, and is expected to worsen with the Doldrums expanding.

These weak trade winds are northerly or NE’ly in the middle of the Atlantic forcing the frontrunners to go along the edge of the Doldrums which are developing from the Cape Verdes to Fernando da Noronha. They are having to sail towards the East to pass the Canaries, as there is no opening via the Azores. It looks like being a long hard climb back up for the two leaders with the gap narrowing and widening depending on the moods of the Doldrums. Armel Le Cléac’h (Banque Populaire VIII) is going to have to keep a cool head and do a lot of work out on deck to ward off an attack from Alex Thomson (Hugo Boss), who will almost always be able to sail on his intact foil and could gain an advantage tactically. It looks slightly simpler for Jérémie Beyou (Maître CoQ), but he too will have to go via the Cape Verdes and the Canaries…

The problem is different for the three Kings bearing gifts for St. Helena on Twelfth Night. The high is present ahead of them and is set to build tonight stretching out from Cape Frio to the Cape of Good Hope. They have no choice but to cross it to go from the NNW’ly air stream to an easterly flow. Between the two, the winds are variable in strength and direction and particularly light. Jean-Pierre Dick’s position to the West (StMichel-Virbac) seems more favourable, particularly as the skipper from Nice is 80 miles further north than his rivals, but Jean Le Cam (Finistère Mer Vent) and Yann Eliès (Quéguiner-Leucémie Espoir) will probably get through this area of light winds more quickly. The three should be back on level pegging on the same route just a few hours from each other on Sunday.

It is looking good for seventh-placed Louis Burton (Bureau Vallée), who will quickly be leaving the Forties thanks to a low off Argentina. The winds should enable him to gain almost 500 miles in 48 hours from the three Kings ahead of him and to extend his lead over the Hungarian, Nándor Fa (Spirit of Hungary), who will be approaching the Horn in two days from now. As for the others in the Pacific, only Conrad Colman (Foresight Natural Energy) and Éric Bellion (Commeunseulhomme) will be benefiting from an Antarctic low, while Arnaud Boissières (La Mie Câline), Fabrice Amedeo (Newrest-Matmut), Alan Roura (La Fabrique) and Rich Wilson (Great America IV) are likely to be caught by a high-pressure system that will be holding on to them. 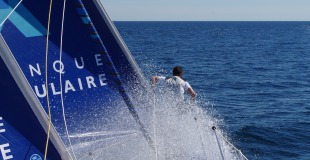 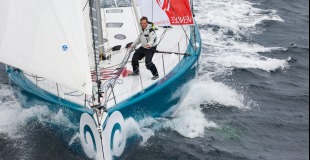 When a victory is staying on course 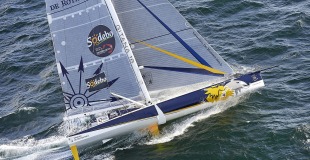 Vendée Globe 2020: Boris Herrmann, the first German to compete in the Everest of the seas