Given that three boats had finished within three hours, a first in the history of the Vendée Globe, the post race celebratory party in Les Sables d’Olonne was proportionately bigger and lasted longer. Even so, fourth placed Jean-Pierre Dick and fifth placed Yann Eliès were back in the race village this Thursday morning, meeting and greeting visitors and participating in the Vendée LIVE! shows.

Twelve skippers are still racing. The next to finish should be Louis Burton who is on course to finish seventh with an ETA forecast to be Tuesday. The skipper from Saint Malo is routing slightly to the NW to catch an Atlantic Low pressure system, the back of which seems set to give some muscular conditions for Spirit of Hungary’s Nandor Fa who is expected a week later in eighth place around February 6th or 7th. 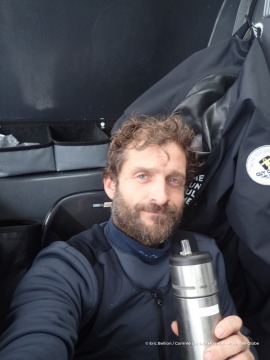 Eric Bellion, in ninth, has been struggling with squally weather off the NE corner of Brasil. Like other skippers has followed the finishes of the six skippers whose IMOCAs are now safely docked in Port Olona, Les Sables d’Olonne. But he won’t allow himself to consider the finish line or focus on it, he is only taking time to enjoy and make the most of each day, each mile. “I am happy for the guys who finished. I am quite jealous of the big party they had in Les Sables d’Olonne, I wish I had been there, but for me the finish line is still a long way ahead. I have not made any routings to see how many days I have left to get to Les Sables d’Olonne. I don’t want to know. My objective is the Equator. I want to feel everything as it happens I don’t want to be focused on the finish line at all. I have worked so hard on this Vendée Globe that I want to experience each thing as it happens. I have worked so hard for this Vendée Globe. It is an incredible part of my life. I was to keep on raising my goals on this incredible boat. 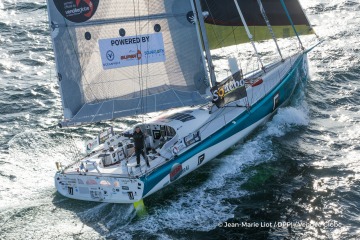 Conrad Colman in tenth, still some 650 miles ahead of Arnaud Boissières, spoke today to the New Zealand based designer of his Foresight Natural Energy, Angelo Lavranos. The South African designed the IMOCA in 2003 as Galileo which became Maisonneuve and was launched in 2005. Colman is still well ahead of a bunch of newer, more powerful designs despite only having a limited foretriangle – either a staysail or J3 jib. Colman said: “Finally I have stopped losing miles to the boys behind. The speeds I have been doing these last few days are not representative of the potential of the boat or the skipper. It is very difficult to trim the boat when you have the full main and just the J3 or the trinquette (staysail) at the front. It is difficult to go upwind like that. I have 18-20kts and am reaching. I think I am out of the most frustrating part of the race so far. It is good to be back up to speed again. We have created quite an interesting relationship over the last 12 or 13 months. I have spent more time with the boat than I have with my wife. That was even before the start of the race because I did a very big refit and two solo Transatlantics. It is nice to be sailing on a boat which is a reflection of my own efforts and I certainly am taking a lot of satisfaction from the fact that I was able to imagine a lot of scenarios that might happen in the Vendée Globe and come up with a plan to keep going in the case of all the different scenarios.”

For them the race goes on with the same relentless intensity. Eight thousand miles behind Burton and 900 miles west of Cape Horn, Sébastien Destremau is due to encounter stormy conditions even though he slowed to avoid the worst of a low pressure system. He should reach Cape Horn late on Sunday or on Monday.

Azores high for Bureau Vallée and heavy weather for TechnoFirst-faceOcean

And then there were twelve