The 23 year old Swiss sailor who is the youngest of the 29 solo skippers who left Les Sables d’Olonne on November 6th, Alan Roura, crossed the finish line of the Vendée Globe this Monday morning at 0812hrs UTC to take 12th place. Sailing one of the oldest boats in fleet for this eighth edition of the non-stop solo round the world race, Roura’s finish reflects his exceptional drive and tenacity and belies the very tight budget which the young sailor ran his programme on. The sailor who turns 24 on 26th February is the youngest skipper to finish the race since it was first contested in 1989. Race rookie Roura’s elapsed time for the 27,700 mile course is 105 days, 20 hours 10 mins and 32 seconds.  He actually sailed 28,359 miles at an average speed of 11.16 knots.

He may have finished 31 days after race winner Armel Le Cléac’h, but sailing the renowned Superbigou which was built in a garden by compatriot Bernard Stamm – renamed Le Fabrique for the race - he was just under 2 days behind 11th placed Fabrice Amedeo on a faster, newer generation boat. Just before finishing he said: “Twelfth. It's funny because basically I found a racer inside of me. I am more than proud of this position.  With this boat which is now 17 years old I don’t think we could realistically have expected to do much better. To finish as first of the 'older generation' boats that just seems a bit nuts to me, a bit unreal. But really it  feels like a great victory.” Roura’s IMOCA boat is just six years younger than the skipper who brought the Pierre Rolland design non stop around the world for the first time, completing the race that Stamm built the boat for between 1997 and 2000.

The young skipper who stopped his formal schooling at the age of 13 to pursue an ocean sailing career has sailed a very impressive first Vendée Globe conquering successive technical problems, making smart, mature routing decisions and constantly improving his performance, from a conservative, safe Indian Ocean to pressing hard and delivering good daily averages in the Pacific, Roura climbed back up the Atlantic well, only struggling in the latter stages with light winds in the final days before finishing. In terms of ocean miles Roura, a native of Geneva, already had the equivalent of a round the world race under his belt before he started the Vendée Globe. He has spent most of his life on boats. As a youngster he lived on a boat on Lake Geneva. He stopped school to work with his father. He sailed tens of thousands of miles on his family’s boat. On the day of his 18th birthday he got his Yachtmaster certificate, the youngest age possible. From 2012 he started out in solo ocean racing, competing in the Mini Transat at 19, in a 1994 boat built of wood and epoxy. The following year, 2014, he took on the Route du Rhum in Class 40 but had to abandon. 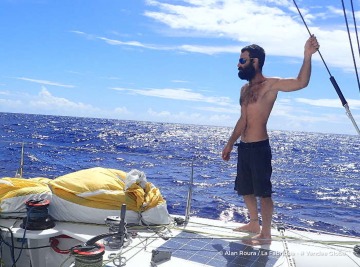 © Alan Roura - La Fabrique / Vendée GlobeRoura is the only Swiss skipper in this Vendée Globe and follows in the wake of Dominique Wavre who has finished the race three times, completing his Vendée Globe in fifth place in 2001 in 105 days. He extends the remarkable history of the incredible Superbigou which Stamm sailed to win the solo, with-stops Around Alone and Velux 5 Oceans round the world races. The boat which he built in a garden in Brittany also finished the 2011 Barcelona World Race, a third racing circumnavigation although stopping in Wellington. The non-stop solo round the world race was something that was always in the back of his mind as the ultimate goal, but after his Mini Transat, Roura asked himself “why wait?” He saw himself as a young adventurer rather than a racer, and so did not want to take the usual career path of competing in the Figaro circuit. “People just look at my age, which is not the way to go about it. You can be 40 and have never sailed or 23 and have spent your life sailing. Now, my age is a tool in communicating, but initially, it was a hindrance.”

The day before the start he said, “I hadn’t realised how close we were getting to the big day. Yesterday, I went out to get some air. I should not have done that. I started thinking a lot. I feel My stomach feels knotted. My heart is beating faster…” While it took him a while to get over the emotion of the start, Roura soon discovered his competitive spirit. On the way down the North Atlantic, there were some tense moments sailing by cargo vessels and due to the variable winds, little time for rest. He made some gains by taking a westerly option off the Canaries and was able to adopt a point of sail that suited his older boat sailing downwind at around 16 knots with peak speeds approaching 25 knots. Remaining to the west, La Fabrique was chasing Great American IV, Spirit of Yukoh and Famille Mary - Étamine du Lys, as they passed the Cape Verde Islands. The Doldrums were not simple for Roura and at around the same time he lost his broadband connection due to a problem with his Fleet antenna. This not only meant less communications with shore, but also fewer weather files. In order to download the required software, the Swiss sailor sailed close to the coast of Brazil, extending his route. The operation was successful, but Roura dropped back to 24th place, 2500 miles behind the leader. He would continue southwards alone to pick up a low-pressure system moving away from South America. More miles on the clock, but the hope of higher speeds to sail eastwards towards the Cape of Good Hope. For his first time in the southern ocean, the welcome was not very friendly with winds up to 50 knots and a nasty 10m swell. “At least now, I have found my rhythm. If the wind drops to 20-25 knots, it feels like I’m in light airs.” 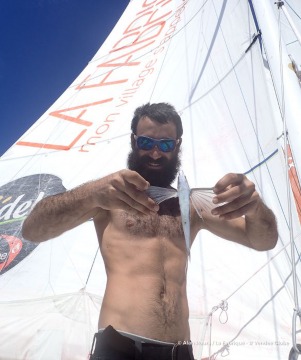 © Alan Roura - La Fabrique / Vendée GlobeOn 4th December, Roura informed his team that there was a problem with his starboard rudder attachment, but once this was resolved, he accelerated gaining ground on the pack ahead of him. Roura rounded the first of the three capes at 1043hrs UTC on 6th December. On the same day he learnt that Kito de Pavant had been forced out. “Touch wood. Luck is being kind to me. I’m now aiming for Cape Leeuwin. The Indian isn’t reassuring, but I’m going to give it my all.” After 44 days and 9 minutes on 20th December Roura crossed the longitude of the Australian cape. “I can’t believe it. I’ve sailed almost halfway around the world!”

La Fabrique entered the Pacific on Christmas Day in twelfth place. After his first Christmas alone at sea, he would declare, “We’re on our way home now. I don’t have any choice but to keep going. I’m on the right track.” The New Year’s Eve celebrations were kept to a minimum, because by now Roura was in race mode with several other boats close by and conditions were particularly rough after the passage ahead of them of a deep low-pressure system. On the evening of 2nd January, Roura contacted his shore team to tell them his starboard rudder had broken in a collision with an unidentified floating object and this had led to an ingress of water at the stern of the boat. The rudder was changed the following morning and the flow of water stopped. In light airs, the Swiss skipper carried out a thorough check and was reassured that there was no serious damage. His goal had been to get ahead of Arnaud Boissières, but because of this incident, he found himself 150 miles behind Fabrice Amedeo.

Roura rounded the Horn on 16th January after 71 days 4 hours and 37 minutes. “It was magnificent exactly how I imagined. I’m at the end of the planet, the most southerly point. It’s absolutely incredible. I don’t know what to say.” Due to the ingress of water, Roura lost a lot of his sweets and snacks and was forced to ration himself. He also lost his razor, which led to him growing a bushy beard on the way back up the Atlantic. “I think I have found absolutely everything I was looking for in terms of experience in this adventure. The joy, tears, despair, tiredness, the sheer enjoyment. Everything you can experience in a lifetime condensed into100 days.” 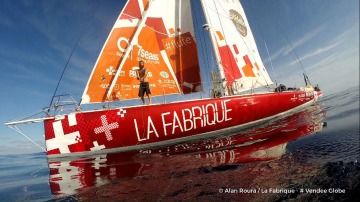 While tightening a halyard on 29th January, his winch came away from its base, which required some more ingenuous repair work from the solo sailor. Roura returned to the northern hemisphere on 3rd February after 89 days and 23 minutes. After hearing of Conrad Colman’s dismasting, the young Swiss skipper was made aware that even if he was now close to home, the final stretch could still be tense. The weather was not very helpful either, as the usual series of low-pressure systems in the North Atlantic were not in their usual location and the forecasts were far from clear for the final week. “My mood swings with the weather changes. Someone is playing a joke on me maybe? I think I have reached my limits. I’m disgusted to see the final miles are going to be the hardest. I can’t stand this torture I have been experiencing since Cape Horn. I want to cry or scream. Getting hit so hard so close to the finish, not knowing where to go and when I’m going to finish. I have my ups and downs like everyone, except that some people don’t show it. I’m a bit afraid after completing what has been my biggest project. It’s something I dreamt of as a child. Ashore, I won’t have my boat, or money and I’ll have to start all over again. I’m going to have to get my finger out to set up another project with a more powerful boat and then come back."