Home News Alex Thomson Heads to Cape Town After Rudder Damage, His Vendée Globe Is Over

Alex Thomson Heads to Cape Town After Rudder Damage, His Vendée Globe Is Over

The hopes of British skipper Alex Thomson of winning the Vendée Globe were dashed by damage to the starboard rudder of his IMOCA HUGO BOSS on Friday evening. This insurmountable problem occurred almost exactly one week after Thomson discovered extensive cracking to the longitudinal framing towards the bow of his boat which he had repaired.

He is heading to Cape Town, 1800 nautical miles to his east-north-east and was making around seven knots under reduced sail this afternoon.  His team have announced he is no longer racing in the Vendée Globe.

After the extensive remedial repairs to the bow, working through the nights of Sunday to Thursday, Thomson had just declared himself back in the race and, at the gateway to the Southern Ocean, was ready to exploit the best of his black and pink IMOCA which was designed to be strongest in the fast downwind conditions of the ‘big south’. He was in 15th place some 650 miles behind fleet leader Charlie Dalin (Apivia) when his team announced this Saturday afternoon that he will be abandoning the race on his Cape Town.

The British skipper, who was racing in the Vendée Globe for the fifth time, had received huge support and respect from around the world for the efforts he made to repair the bow area but there was no way to safely fix the rudder damage to allow him to race on for the what would have been the best part of one month in the hostile Southern Ocean.

Alex Thomson said,  “Unfortunately, a repair is not possible. We therefore accept that this will be the end of the race for us. Myself, my team and our partners are of course deeply disappointed. We believe the best was yet to come in this race”

One of the two outstanding favourites to win this Vendée Globe, Thomson was third on the 2012-13 edition and finished second in 2016-17 after fighting back from being 48 hours behind eventual winner Armel Le Cléac’h at Cape Horn to finish only 16 hours behind the French skipper.

Luck has rarely run in his favour on this non-stop solo round the world race. In 2004-5 on his first attempt, he had to abandon into Cape Town with damage to his deck after his boom gooseneck failed and in 2008-9 he had to retire early in the race with structural problems caused by a huge gale on the Bay of Biscay.

Endorsing his ranking as a pre-race favourite Thomson had lead the race for six days, crossing the Equator with a lead of 70 miles. He was lying second, just 45 miles behind leader Charlie Dalin, when the initial structural problem surfaced.

“I am so very disappointed for Alex and for his team. He had done so much hard work to put himself and his team in a position to win this race and he looked like he had the capacity to do so. Even when he was coming back after the repairs, I still felt he could do it and he certainly looked like he was ready to give it his best shot. He set out his stall clearly to win this race and looked like he could deliver, so it this is a big disappointment for him and all of his followers. He’s the guy so many of us were rooting for and following every day.” commented Mike Golding, Britain’s four-times Vendée Globe racer. 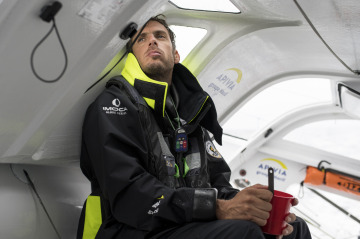 Racing towards the longitude of the Cape of Good Hope which he should pass early on Monday, leader Charlie Dalin has seen his margin cut very slightly by the chasing group as he has been in slightly lighter breezes, now 370 miles ahead of second placed Thomas Ruyant (LinkedOut) while Jean Le Cam (Yes We Cam!) still profits from a more northerly, direct routing to still lie a consistent third more than 100 miles up on Yannick Bestaven (Maître CoQ IV).

"I'm slightly forced to move away from the Antarctic Exclusion Zone by the conditions my route is a bit different from those chasing because I'm forced to sail north-eastwards as I speak. I'm spending a lot of time at the nav station to adjust my route as best I can because over the next few days we're going to have quite a bit of wind: we need to find the best course. The sea was quite rough last night but now it's starting to calm down a bit, albeit only slightly. I'm currently doing 22-23 knots of NW'ly. The sky is uniformly grey, but the nights are short, which compensates nicely. The AEZ has been moved a bit further up by the Race Direction, which takes away some tactical possibilities in the strong wind that is coming. I'm going to continue northwards, but I'll come back down after the passage of the front. The wind direction is slightly dictating the trajectory. I guess it will take about a month to get around Antarctica.  I don’t have the feeling of holding back and am making a normal pace all whilst not taking any unnecessary risks. We're all going to find ourselves on the same weather train because there I have not made any inroads on the chasing pack, who will be able to head due west when I'm still making progress North-West. We should then see a bit a bit of compression in the fleet ahead. My lead is likely to diminish over the next few hours. After that there will be strong winds and so it will be our first storm after the Cape of Good Hope! There's quite a lot of current with the Agulhas: you have to be careful in these places. I should cross the longitude of the Cape of Good Hope on Monday during the day. But right now, I'm really happy to finally be sailing in these southern seas, especially with the beautiful moon shining. Last night was magical with lots of birds circling around the boat. Having spent the last two weeks wearing shorts, the change of climate is quite brutal, despite the gradual change.”