Home News Dalin Back To Work, On Top, And Looking Only Forwards

Dalin Back To Work, On Top, And Looking Only Forwards

Almost eight months after crossing the finish line of the Vendée Globe first but taking second after time corrections Charlie Dalin has fully recovered.  Together with Paul Meilhat, he won the Rolex Fastnet Race comfortably in early August and the duo certainly establish themselves as favourites to win the Transat Jacques-Vabre in November.

This time, again, Charlie Dalin arrived in the dark. Early on the morning of August 11 at the end of the Rolex Fastnet Race, the images of Dalin and Meilhat arriving into Cherbourg rekindled memories of that amazing finish across the mythical line at Les Sables d’Olonne.

But the images stop there for Dalin:"I just don’t dwell on the events of the past," he confides. “Right now it is time to only I look to the future. My desire is only to win.”

"Charlie is hyper-motivated by the challenges to come" (Meilhat) 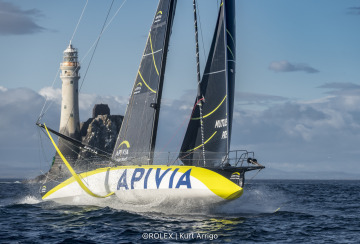 © Kurt Arrigo / RORC / Rolex Fastnet Race The skipper who originates from Le Havre is first and foremost a competitor, one who never gives up and who needs to set, and reach goals constantly.  And so it was  only a few days after he finished his Vendée Globe that he picked up his phone to call Paul Meilhat, winner of the last Route du Rhum. The objective: to share the APIVIA adventure with through the Transat Jacques-Vabre which will start in November from Dalin’s hometown.

“He needed to be looking ahead, to have a next target and that was not out of any desire for revenge but from his need to always have a challenge on his horizon,” says Meilhat “Despite the fatigue of the Vendée Globe there he was: hyper-motivated by the challenges to come ".

The two sailors have already been co-skippers together on other projects and came through the Skipper MACIF Figaro scheme together, the relationship is going well.. “Charlie got me on board early which also allowed me to spend time ‘on site’ says Meilhat.

"It's very fluid between us," Charlie continues. “He quickly understood how I work and the chemistry came naturally. We're on the same page. The refit phase has helped to improve "many details" on the deck and the general ergonomics of the IMOCA." 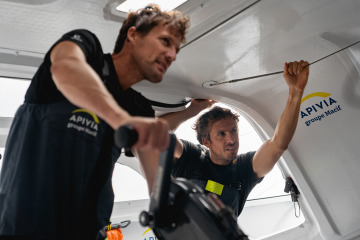 © ©M.Horlaville-PolaRyse / disobey. / Apivia The main new thing is the the foils designed by Guillaume Verdier, ones that APIVIA had planned for the Vendée Globe before sticking with the previous versions due to lack of time to optimize them.
"They generate more power," says Paul,

"That makes the boat a little more nervous than before. This is not a revolution but rather an evolution," Charlie smiles.

It would take more than this to unsettle someone who has already completed the equivalent of two round-the-world races on board. "Now This boat is an extension of me," he grins

Dalin’s in-depth knowledge of his IMOCA, the rapid integration  of Paul Meilhat and the cohesion of the pair notably contributed to the commanding victory in the legendary Rolex Fastnet Race. "As soon as we came out of the Solent where it was windier than the sea state and so we found a mode a little faster than the others that we had not yet experienced: foiling upwind," explains Dalin. He cites a "pretty incredible sequence" and "wind shifts exactly as we had planned"

And on the finish line there was great satisfaction, "We're just so happy that the hard work the whole team has put in over the last few months is paying off," Charlie said.

The clock is ticking 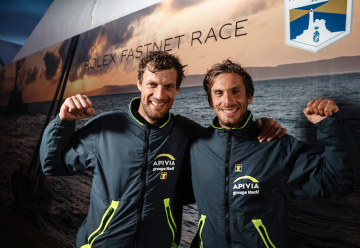 It is easy to see APIVIA as the big favourites of the Transat Jacques-Vabre, which will start on November 7. But Dalin cautions: "We're not running away with ourselves, we weren't able to measure ourselves in all conditions and we still have a lot to fine-tune ". Before going to Le Havre, there is the Défi Azimut, from September 14 to 19, courses with the Finistère Course au Large pole and lots of sailing

“There is still a lot to do and, like all IMOCA projects, you never have all the time you need. In terms of the sail inventory and the search for reliability, the training schedule, choices have to be made, ” Paul Meilhat says “We know nothing is guaranteed in advance in ocean racing. All the best boats will be in Le Havre. We will have to fight not to make a mistake and it may not be enough. "

At APIVIA in any case they are doing everything to be at 100% for when the start gun goes in 76 days time.