For its second edition, the Vendée Arctique – Les Sables d’Olonne race has attracted a strong line-up at just over two years from the start of 2024’s 10th edition of the Vendée Globe. The sporting as well as the media successes of the phenomenal 2020-2021 edition have really stimulated skippers’ projects and their sponsors, so that this time the transition phase from one race to the next has proven to be particularly short. The Arctic Vendée is the first of the five races* for skippers to qualify to be at the start of the the Vendée Globe 2024. So naturally skippers want to get qualified as quickly as possible.

The start of the Vendée Arctique will be sounded on Sunday June 12 at 1700hrs local time off Les Sables d’Olonne. The 25 skippers will then face 3,500 miles of a challenging and unprecedented course, which will take them on a race of discovery to the northern waters of the Arctic Circle. .

Seventeen of the 25 skippers who have entered the Vendée Arctique competed in the Vendée Globe; 15 took the start on November 8, 2020. Eight sailors are therefore competing in this race as they head forwards on their course towards their first Vendée Globe.

The "seasoned" Vendée Globe (17 skippers):
These skippers raced the ninth edition in 2020 (15 skippers):

The Skippers in figures :

- The fleet is made up of 14 IMOCAs with foils, and 11 IMOCAs with straight daggerboards. 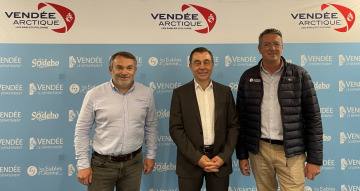 © / Vendée Globe The Vendée is a French Department for which tourism is a main economic activity. It is looking to strengthen its position as a premium organizer of offshore ocean races at the same time seeking to  lengthen and augment their tourist seasons. In the pure tradition of the Vendée Globe, the race embraces its widespread popular following with a large race village open in Les Sables d’Olonne for 3 weeks, from June 4 to 26.

In addition to the imperative of sporting qualification, there is also that of selection: because to be one of the 40 starters in the Vendée Globe 2024, you will have to have run the most miles in the races of the IMOCA GLOBE SERIES Championship.