Home News Back to school: A promising start for the new IMOCAs

In the last four months, seven skippers have launched their new IMOCA. Six of them competed in the Défi Azimuth last week and have already demonstrated that they are up to the task even after a few weeks of training. As the Route du Rhum approaches, the sailors are already thinking about the major goal, the Vendée Globe 2024.

Since the beginning of September, there has been a lot going on with the IMOCA in the port of Lorient. The onlookers who have been enjoying the sunshine over the last few days at La Base marina must have had the feeling of being on the edge of the Port-Olona channel. And this was confirmed last week with the Défi Azimut, the back-to-school event of the IMOCA Class. Among the participants, five skippers were lining up their new boat for the first time in competition. Since the end of spring until this summer, many boats have been launched. Kevin Escoffier (PRB which became Holcim - PRB) was the first in May, followed by Maxime Sorel (V and B - Monbana - Mayenne) on 27 June. In July, Jérémie Beyou (Charal 2), Boris Herrmann (Malizia - SeaExplorer) and Sam Davies (Initiatives Cœur 4) followed. At the end of August, it was the turn of Yannick Bestaven (Maître Coq V) and Paul Meilhat (Biotherm) to launch their boat.

With sisterships, « there are only advantages » 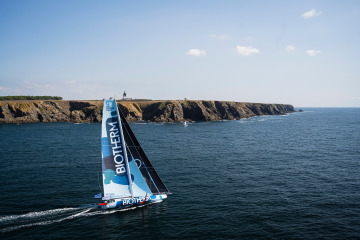 This choice may be linked to an economic imperative - "we couldn't start with a blank page for a new boat" (Sam Davies) -, or to the need to be ready quickly, as Maxime Sorel says: "the idea is to be as reliable and as optimum as possible for each race" (Maxime Sorel). "We wanted to limit costs and sail as fast as possible", summarises Kévin Escoffier. Yannick Bestaven says nothing else: "There are only advantages: we had the studies carried out by 11th Hour Racing Team, all the existing tools, we save precious time, it costs less, the boat is in the water sooner and it's more environmentally friendly". 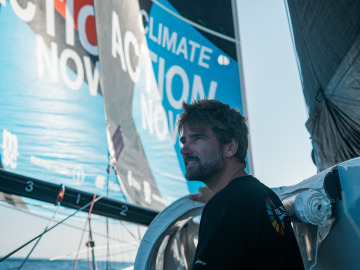 Charal and Malizia teams have completely redesigned their new boats with VPLP. "In order to have as few constraints as possible in terms of developments it was more interesting to start from scratch," emphasised Jérémie Beyou. In fact, the skipper's project began before the last Vendée Globe and some of the meetings with his design team took place... during his round the world race.

While each project has its differences, there is the same desire to have boats "able to be sailed at any speed" (Jeremie Beyou), "to maintain high average speeds over time" (Kévin Escoffier), "to be very comfortable downwind" (Boris Herrmann). "We all want to get through the sea better," smiled the winner of the last Vendée Globe, Yannick Bestaven. In short, the idea is "to have the most reliable boat possible so that we can get the most out of it," continued Maxime Sorel.

Test match at the Défi Azimut 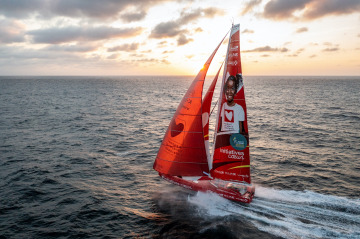 For the six new boats, the Azimut Challenge was the first official confrontation. This event, always so friendly and disputed under the sun, consisted of three events: speed runs (last Wednesday), the 48 Hours Azimut (from Thursday to Saturday) and the “Tour de l'île de Groix” (Sunday). The 48 Hours is the key event: raced single-handed or with a crew, it gave a first overview of the boats' performance. And for the newcomers, the results are particularly satisfying.

In the single-handed category, three boats finished in the top five close to the winner, Charlie Dalin (APIVIA): Charal 2 (3rd), V and B - Monbana - Mayenne (4th), Holcim - PRB (5th), not far from Initiatives Cœur 4 (7th). "I expressed myself as I wanted to," said Jérémie Beyou, who recalled that he was "on the first page of the discovery of the boat". "I would have signed up straight away for this 4th place: my boat can give even more than I imagined," said a delighted Maxime Sorel. "I'm not going to deny my pleasure, the boat is moving very fast", said Kevin Escoffier, while Sam Davies was enthusiastic about her "incredible boat".

On the other hand, Biotherm has to abandon, due to the breakage of the winch unit. But Paul Meilhat was positive, especially as he had only sailed a few miles before taking the start. "We discovered a lot of things about the boat. There are some small youthful problems but also some very good performances that are beyond our expectations." The Biotherm team is also preparing for The Ocean Race, which will start on 15 January in Alicante, with 11th Hour Racing Team - Mālama, Guyot Environnement - Team Europe, Holcim - PRB and Malizia -SeaExplorer.

During the 48 hours (in crew), Boris Herrmann stayed in contact with the winner, 11th Hour Racing Team - Mālama. This proved the relevance of his atypical design choices. A few days earlier, the German described the boat as "a little rounder, a little bigger than the others" in order to "gain in volume of buoyancy, in comfort and to be more efficient downwind VMG". 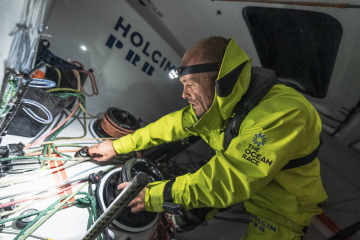 The race ended on Sunday with a rounding of the island of Groix which was shortened due to the light conditions. The winner of the last Vendée Globe, Yannick Bestaven was due to take part in this race but the construction of Maître Coq V took a bit longer than expected. "It was also supposed to be the start of a new school year, but we were caught up in time," he explained. The priority is to understand the way the boat works and to get her under control before the Route du Rhum. The new boats will be among the 37 IMOCA boats that will be lining up at the start of the legendary transatlantic race, the second qualifying race for the next Vendée Globe. But for them, the ranking is not the first objective.

"The aim is to continue to discover the boat and to learn," said Maxime Sorel. "We never enter a race just to make up the numbers, but the most important thing is to get to the finish," adds Jérémie Beyou, while Kevin Escoffier, who is also preparing for The Ocean Race, thinks that "we need to gain experience, reliability and performance" and wants to take care of his boat, like all his competitors. "We are certainly skippers, but we are also company managers," reminds Maxime Sorel. "We have to take it step by step, not to pull too hard on the boat because we have to ensure qualification and reassure our partners. We can't set the wrong goal," smiles Yannick Bestaven. Our common goal is the Vendée Globe 2024. And the countdown has begun more than ever.