Home News Oliver Heer : “In January 2021 in Cape Town, Alex Thomson told me it was time to go for it"

Oliver Heer : “In January 2021 in Cape Town, Alex Thomson told me it was time to go for it"

Not many 2024 Vendee Globe skippers will have made the step up from captain of a cutting edge IMOCA racing machine which competed on the last race to competing in their own right on their own boat with their own programme but Switzerland’s Oliver ‘Ollie’ Heer is on course to do just that.

From 2018 until the boat was sold, 34-year-old Heer was boat captain for Alex Thomson. Having started out as a junior crew with Alex Thomson Racing Heer progressed from working on the previous boat to having responsibility for the innovative black and pink machine during the build-up to the last Vendee Globe. And when he had sailed over 40,000 miles with Thomson it was the British racer who suggested that the time was right for Heer to take the plunge and do the race himself.

Now, armed with the Farr designed IMOCA which was born as Gitana 80 and which Romain Attanasio sailed to 14th on the last Vendee Globe, Heer has just completed the first key stage of his qualification by finishing 32nd in the Route du Rhum-Destination Guadeloupe.

The race did not go to plan but Heer comes away with a host of positives as he steps up his search for funding. A collision with Japanese Vendee Globe racer Kojiro Shiraishi (DMG MORI Global One) at the Cape Frehel buoy early on the first night of the Saint Malo to Guadeloupe solo race required both to return to Saint Malo immediately with damage. The level of damage to Koji’s boat meant he could not carry on whilst for 34-year-old Heer and his team it meant three and a half days and nights of round the clock repairs to get back on the race course. And so when he reached the finish line in Pointe-à-Pitre it was an exhausted but nonetheless delighted Heer who sees his problems along the way as blessings which will make him and his 2024 Vendee Globe programme all the stronger and better in the long run.

Recovering in Guadeloupe he shared the positives from his race, not least in his narrative – fighting the odds to get back on course and then sailing a real ‘solo’ race – has raised his profile and engaged more race fans. “This Route du Rhum – even though it was not the result we wanted – it is a good story and it shows we are very determined to make it all happen. I tried to get a lot of good media off the boat. It is one of the good platforms you have over these three years, to tell your story.” recalls Heer who shares Thomson’s communicating and story telling skills. 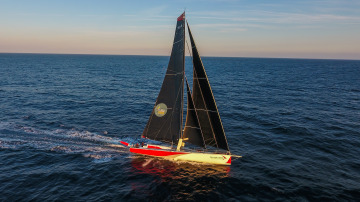 Heer grew up sailing Optimists on Lake Zurich beside the city of the same name. Since he could first read, he has been an avid ocean racing fan and followed all the classic solo and crewed round the world races, especially the Vendee Globe

Before moving into the world of professional sailing he qualified with a business management degree and had a proper real world business career in the Far East. He is armed with a quick mind and clear, pragmatic determination. Multilingual - German, French, English and Chinese spoken here. And while he is pursuing his own dream on his own terms, part of the reason for his choices is carrying on a legacy for his sailing mad businessman father who died suddenly aged 52 in 2014.

“Life is too short and you have to do what you really, really enjoy and not work in a job you don’t love, hoping to just tick things off on your work list every day. My dad passed away at 52 and he was a very passionate sailor and that is where I got the passion from. He wanted to do transatlantic races and things and so I feel like I am carrying on his love.”

“I followed the Vendée and the big races in the magazines and the likes of Dominque Wavre and Bernard Stamm were my heroes” he recalls. When he was working is Asia he realised he could make a living from professional sailing and when he returned to Europe he worked his way through the ranks, becoming boat captain on a very successful Lombard 46 foot IRC racer Pata Negra. From there he was recruited at junior crew level to work with Alex Thomson. Heer worked hard and smart and rose to become Boat Captain of HUGO BOSS.

Indeed Heer was one of the first on the scene in Guadeloupe when Thomson damaged the boat at the end of the 2018 Route du Rhum and also was in Cape Town when the British solo skipper had to retire from the last Vendee Globe. It was on the way back to the UK from Cape Town that Thomson suggested the time was right for Ollie to do his own Vendee Globe programme.

“Alex told me to quit. In January 2021 when we sailed home from Cape Town that was when he told me. He did not really tell us he would retire but I know him well and that was a subliminal message I was feeling. He said ‘Ollie if you want to do this, now this is the time.’ And so I had a good think, I thought ‘I am young, have good technical knowledge and I enjoy speaking to people’. I think I am a good communicator, I am not introverted. I asked my wife and my mum and they both said yes straight away. My wife Theresa worked for the Boss team and so has been at Vendée starts too and so she knows what this is all about. She said ‘Ollie, let’s do this’. We have had a professional approach since the very start.”

Heer has a well proven, well founded Farr design which was built as Gitana 80 and which most recently did the Vendee Globe as Romain Attanasio’s Pure - Best Western but which has three previous non-stop racing circumnavigations as Renault ZE and GAES Centros Auditivos in successive Barcelona World Races and with Fabrice Amedeo as Newrest-Matmut, in the Vendée Globe 2016.

A busy and exciting 2023 season

Only having acquired the boat in May and been full on since then, after his 32nd place from the 38 starters on the Rhum, Heer is taking his Oliver Heer Ocean Racing back to his base in Port la Forêt, where he and wife Theresa are relocating to from Hamble in England. There he will spend the winter refitting the IMOCA to be ready for a full 2023 season and beyond.

“We will have to get the boat out of the water, do the repairs properly, they have been temporary and then look at the electrical systems and do a lot of improvements.  Then the plan is to do all of the Globe Series events from now until the Vendée. The Bermudes 1000 race in May, then there is talk of a fully crewed leg of The Ocean Race to Genoa that is the chat and then it is to Cherbourg for The Fastnet and then the Transat Jacques Vabre and then the Retour à la Base. So it will be busy in 2023.” he enthuses.

“It is nice and good to have validated my 2022 qualifier race for the Vendée Globe. It is only a small but crucial part, but to be confident you have a spot in the Vendée Globe you need to do and complete every single race. And if you are lucky, if you have to retire from one big one, you should still be in. But there is no room to relax, ever.”

To date his project has been largely self-funded but they are actively looking for commercial partners and indeed had come close with a major Swiss brand before the Rhum. He has many good connections in Swiss Germany and is confident he and his team can land a solid sponsor. With Alan Roura and Justine Mettraux active in Switzerland there is a big following for the Vendee Globe and he believes companies want to be involved.

"We need to find more funding. At the moment it is very tight. Theresa and I know what we need. I know from a technical perspective when I need to have a reliable boat on the startline and Theresa knows from an event and management perspective what we need to deliver for good sponsors and to overall make a good programme. We are very much aware of the budget we need to raise.” he concludes.

Meantime he remains in close contact with Thomson who was one of the first to call with encouraging words after that collision on the first night. Heer laughs, “Alex said ‘Ollie I have been in these situations a few times, keep smiling, be positive. And when I sailed past Guadeloupe, I sent him a picture of the spot he had hit and said ‘Look Alex I made it!”

Post-Route du Rhum: what about qualification for the Vendée Globe?