Winner of the Vendée Globe six years ago today, the skipper of Banque Populaire keeps his memories and "the method" that enabled him to win. Armel also gives his analysis of the IMOCA. He says he is impressed by the current level.

Six years ago to the day, you won the Vendée Globe. Are the memories still vibrant?

For sure, the 19th of January remains an important date in my personal life. Winning the Vendée Globe will remain engraved forever and the memories are still there. Every year it's a bit like a birthday. You realise that you've taken another year and you still talk about it for a while! This adventure has a special flavour this year, as I'm preparing my first round-the-world race in an Ultim boat after six years and the famous Vendée Globe.

Is victory in the Vendée Globe precious in your current challenges?

It's not the victory as such but rather the method. Even if the race we'll be starting next January is a different exercise, on board different boats, there are references, memories, feelings to be drawn on the fact of setting off for a long time offshore, on the experience of the southern seas... I'm lucky because my team has remained largely the same compared to the one that experienced the 2016-2017 Vendée Globe. Everything they have acquired, particularly in the preparation and approach to the race, will be invaluable in the challenge that we are now facing.

"We were pioneers with foils"

Is there any pride in still being the Vendée Globe record holder? ​

It makes me want to fight for new reference times! (laughs). No, I know that records are made to be broken and that will be the case for mine one day or another, depending on the weather conditions. The pride is not necessarily the record itself, but the fact that I have twice completed the Vendée Globe in less than 80 days (78 days and 5 hours in 2012-2013, 74 days and 3 hours in 2016-2017). Not many skippers have managed to do that.

Six years later, it seems that a lot has changed in IMOCA...

We were pioneers in adding foils to our IMOCAs from 2015. At the time, it seemed completely crazy, even absurd for some, but we proved the opposite. It is now one of the main elements of the new IMOCAs which have become faster thanks to their large foils but also harder to sail.

"New IMOCAs are designed for warriors"

All the skippers agree that these boats are particularly physically demanding... ​

The boats were already very demanding when I was in the Class but we can see that everyone is progressing, that the boats are faster and also harder. The new IMOCAs are very demanding indeed, you have to accept the violence of the impacts and manage to spend several weeks on board. These boats are designed for warriors: you have to be tough if you want to do well in the next Vendée Globe.

Have we reached the limit of what our body and organism can bear on board?

It's difficult to answer that because I'm only relying on what I've heard. But indeed, you can feel that the living conditions on board are very hard. I am sure that the teams are already thinking about how to remedy this. We saw at the end of the Route du Rhum how tired some of them were. But it was a sprint. The challenge in the Vendée Globe is to hold on for more than 70 days... It's quite a challenge. You have to manage to keep the boats manageable by one person without becoming dangerous.

What do you think about the new IMOCAs that have been launched in the last few months?

We are always impressed by these machines and eager to learn about the latest innovations. The big development is the fact that the cockpits are increasingly closed to improve aerodynamics and to protect the sailors more. The foils have also become big pieces: they take up space on the pontoons! When the conditions are nice, they are very pleasant to look at. When the conditions get tougher, it's a challenge to keep control and to be able to slow down, but that's the case with all the boats. It will be interesting to see what the teams have learned about this.

"The IMOCA skippers impress me"

The boat you won with, Banque Populaire VIII, finished third in the Vendée Globe with Louis Burton and is now with Pipe Hare... Are you still following her?​

Yes of course and I followed her in the last Route du Rhum, even though I don't know Pip personally. In the next Vendée Globe, there could be the three boats I sailed with: Brit Air (currently China Dream with Jingkun Xu), Banque Populaire VI (Nexans-Art et Fenêtres, Fabrice Amedeo) and Banque Populaire VIII (Medallia, Pipe Hare). And I'm going to follow all three! It also shows that these are boats that are built to last, which is relevant in the desire to limit the environmental impact of each one. 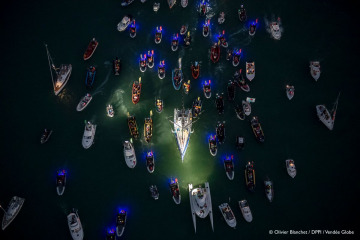 Are there any IMOCA skippers who impress you at the moment?

During the Route du Rhum, during my 'remountada' which was not really what I expected, I passed not far from Thomas (Ruyant, LinkedOut), Charlie (Dalin, APIVIA), Jérémie (Beyou, Charal), Kevin (Escoffier, Holcim-PRB), Maxime (Sorel, V and B Monbana Mayenne), Paul (Meilhat, Biotherm), Justine (Mettraux, 11th Hour Racing)... Of course I'm impressed by them! There is a very high level of performance among the top ten. Without denigrating the performance of my predecessors and the fleet when I was there, the 'Top 10' seems even more difficult to achieve today. It shows that there is a lot of skill and talent out there.

So you're in a completely different challenge with the Ultim Class. But would you like to come back one day to the IMOCA and the Vendée Globe?

I'm very lucky to have a great challenge with Banque Populaire in the future and we'll do everything we can to approach it with the maximum of ambition. I've certainly closed the door on IMOCA racing but it's never completely closed...