The narrow miss is symbolic of Thomson's luck over the past 24 hours. He was pulling away at the head of the 29-strong fleet when Hugo Boss was wounded in the collision at 1035 UTC. Where a foil once exited the boat only a stump now remains, something Thomson will have to deal with for the remainder of the race. The ailment has already started to have an effect on the rankings. Thomson has been forced to take his foot off the gas and his healthy 125nm lead has since been whittled down to under 90 nm. Josse, who has moved into second, and Le Cléac'h, in third, have been trying without success to hunt down Thomson since he snatched the lead eight days ago, but they have now started to move in tentatively.

Despite the gains, Le Cléac'h, runner up in the last two editions of the Vendee Globe, said he would have to wait for calmer seas to take full advantage of Thomson's woes. “The sea state is worsening and with the foils we’re not necessarily faster,” Banque Populaire VIII skipper Le Cléac'h said. “We’re going to have to wait for smoother seas to make the most of these appendages. I’m gradually gaining ground on Alex Thomson, but we need to look after the boat for the rest of the race.” 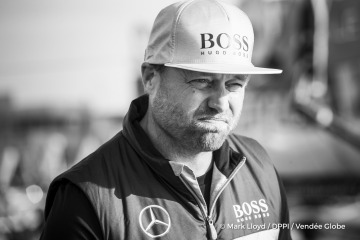 Thomson said he was hoping to be able to stay in front of his chasers until the Cape of Good Hope on the southern tip of South Africa when he can tack and start using his other foil, but until then he must just live with the breakages. “There's still a bit of the foil there, sticking out and slowing me down, but I can't do anything about that,” he said. “At some point I'm going to have to go over the side and cut it off.” When asked what his plan to stave off the attack from Josse and Le Cléac'h, Thomson simply replied: “Pray to the gods that the rest of the race is all on starboard.”

While Thomson is left licking his wounds, 25th-placed Irish skipper Enda O'Coineen had double the reason to celebrate. This afternoon he was bearing down on the Equator with around 60 miles left to sail to cross into the Southern Hemisphere, a huge feat alone. But to add to his jubilation he also had news that has become a grandfather for the first time after his daughter Roisin gave birth yesterday. “I'm on great form - my daughter delivered my first granddaughter, so that's very good news,” the 61-year-old said. “I'm looking forward to crossing the Equator later on today and getting back in the fleet. I'll have a little bottle of champagne and a big fat cigar and I've made special arrangements to have an appointment arranged with King Neptune himself.” 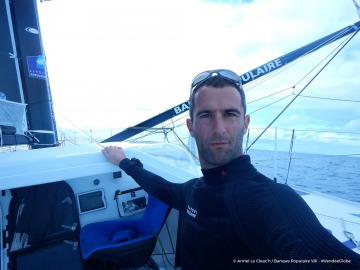 Armel Le Cléac’h (Banque Populaire VIII): “The wind has started to strengthen since this morning. We are not far off thirty knots of wind and the seas are getting rougher. It’s a bit like the conditions we find in the Southern Ocean. It’s a whirlwind taking us in the right direction down towards the Cape of Good Hope. We need to find the right sail configuration, and trim well not to damage everything. I’m doing around 22-23 knots at the moment on average. I am not surprised about Alex Thomson’s speeds. Without a foil, she is as fast as a boat with daggerboards and we can see the speeds achieved by our rivals without foils. The sea state is worsening and with the foils, we’re not necessarily faster. We’re going to have to wait for smoother seas to make the most of these appendages. I’m gradually gaining ground on Alex Thomson, but we need to look after the boat for the rest of the race. I set my pace based on the boat’s polars and the sea state. Occasionally some are faster than others, but the most important thing is keeping up a high average. There’s no point stretching yourself too far just to gain the lead right now.” 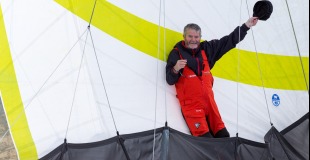 Looking forward to the Equator 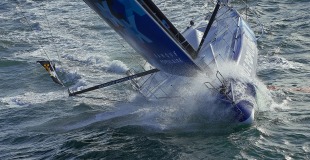 Le Cléac'h and Josse close in on Thomson 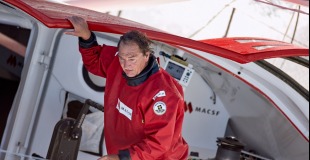