> News > It's a different world

Sébastien Josse (Edmond de Rothschild): "We have a 25 knot northerly. The seas are getting rough, but they’re not that big yet. These are perfect conditions allowing us to continue on our straight track and for our boats, these conditions offer us high speeds. I haven’t looked at the timing, but the Cape of Good Hope should be coming up in three or four days. The goal is to keep up high averages of around twenty knots like the others around me. I broke two stanchions in the Bay of Biscay, but haven’t had any other damage. Conditions have been good, so there haven’t been any problems for the boat. Alex (Thomson) is resisting well keeping up high speeds at these angles. He has plenty of wind. We need to take care of the appendages like we take care of the boat. If we’re doing twenty knots, we’re happy, so why push it? We have seen that the boat can reach peak speeds of 25 knots, but now is not the time for that. The weather means that 20 knots is what is right and in any case, we’ll slow down as we pass the Cape of Good Hope. There will be a transition zone for one day before we pick up another low, which will propel us along.” 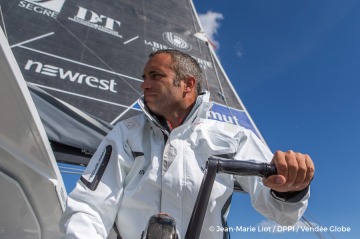 © JEAN MARIE LIOT / DPPIFabrice Amedeo (Newrest MATMUT): "I’m sailing in trade winds that are easing off with eight knots at the moment at 160°. I have decided to move eastwards. It’s something I had been thinking about for several days. It looks very tough for the next couple of days, as we need to get across a front which is stationary and then the area of high pressure in order to get on the fast track to the Southern Ocean. A small group has formed with Louis Burton a hundred miles or so ahead, along with "Cali" (Arnaud) Boissières, Stéphane Le Diraison, Conrad Colman, me, Kojiro and Nandor Fa. I’m trying to match Stéphane Le Diraison and Arnaud Boissières in speed and have been watching the rankings to see how they are doing. I didn’t want to head off east too soon. It’s nice being in a race within the race and that has affected my choices. The others are so far ahead or in totally different conditions that it is not even worth looking at them." 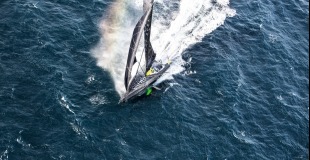 Alex Thomson holding on to his lead 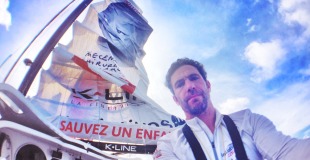 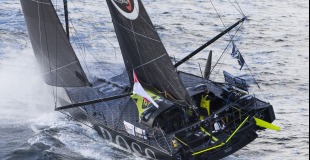