Home News Coastguards on their way to Thomas Ruyant

Coastguards on their way to Thomas Ruyant

The NZ coastguard boat is on its way and should be alongside Le Souffle du Nord at around 1000 UTC. It is not too soon, as the situation has grown worse with the boat sinking her bow down into the water. Thomas Ruyant has officially announced his retirement. He hopes however to save his boat.

The seas and winds are now not as strong for Thomas Ruyant approaching the coast of New Zealand, after a very stressful night aboard his broken boat. He had to deal with winds in excess of fifty knots for several hours with 58 knot gusts. The good news is that the NZ coastguards set off at 0730 UTC this morning and should be alongside him at 1000 UTC. Thomas Ruyant should then be less than fifty miles from the port of Bluff, which he is aiming for.

On this coastguard vessel, two sailors are ready to go aboard with Thomas Ruyant. They are experienced sailors - Stuart McLachlan is well known in the world of ocean racing for being the boat captain of Camper in the Volvo Ocean Race. Marine Viau, who is in charge of logistics for the Le Souffle du Nord team explained, “There is a pump aboard, diesel and some equipment to reinforce the structure of the boat, if required. Two sailors including Stuart McLachlan, who has been involved in several Volvo Ocean Races, are ready to go aboard Le Souffle du Nord, if Thomas feels the need.” 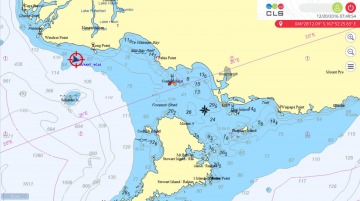 Thomas Ruyant has just officially announced to the Race Directors that he is retiring. That may seem unimportant at this stage, but it does change things, as Thomas Ruyant would risk being disqualified, if sailors went on board before he carried out this formality.

Technically, the clock is ticking. While the coast of New Zealand is protecting him from the worst of the weather, the state of the boat has become very worrying. Laurent Bourguès, technical director for the Le Souffle du Nord team, explained, “The boat is continuing to open up.” Thomas Ruyant told the Race Director, Jacques Caraës, who receives the boat’s position every six minutes and is closely monitoring the situation, that he is now unable to bail out the water entering the boat (at least one of the two pumps is no longer working) and this led him to close the watertight compartment between the sail locker and the inside of the boat. Theoretically, if she doesn’t break up, the boat should not sink with this compartment closed. But she is advancing at 5 knots with her bow down into the water, and the stern of the 60-foot boat is so far above the sea that it is hard draining the water when waves come over the deck. The situation is therefore very tense, “but we have every hope that he will manage to save his boat, once they get the pumps going,” commented Jacques Caraës. It’s going to be a very stressful day, but if the operation is successful, Thomas Ruyant and Le Souffle du Nord Pour le Projet Imagine are due to reach the port of Bluff this evening.

Jérémie Beyou, (Maître CoQ) : “It’s been a tricky night on Maître CoQ. The wind got up to over thirty knots. I grabbed some time to rest and when I woke up, it felt odd, as if the boat had stopped. After a quick inspection, I discovered the sail hold had been flooded. The ballast hole cover out on deck was missing and with the boat heeled over, the leeward section was filling with water. At the same time, the foil housing, was leaking water into the sail hold due to the pressure of so much speed. I opened the inspection hatch a few days ago and it probably wasn’t sealed right when it closed. I blocked the hole with some underwear and tarpaulin and that’s working for the moment. I haven’t managed to stop the leak from the ballast housing and will have to be down to less than 15 knots to do that. Consequently the pumps have been working all out for the past few hours. I’m hoping for some calmer conditions in the coming hours to repair all that.”