My studies: "I did a civil engineering IUT in Saint-Nazaire, then a business engineering qualification at l’Université de Bretagne sud, in Lorient".
My early working life: "I worked in my engineering career for seven years, as a business engineer. I ran maritime and industrial projects from A to Z, such as bridges with bases in the water, ports and underwater structures. I worked for a Nantes company and I was in charge of the area between Le Havre and the north of France, Paris and sometimes Brittany. There was always water in my career path and that was by choice. I preferred to do my engineering degree in Lorient even though I had received offers from Parisian colleges. I chose my work precisely for its maritime angle”.
My first sails: “I was born in Saint-Malo but my parents lived in Cancale. The primary school organized a week of maritime discovery, and at 8 years old I discovered the Optimist sailing, windsurfing… The following year, I was competing in the club”.
My interest in ocean racing: "It grew from a relationship I had with a skipper from Les Côtes d’Armor, Pascal Quintin, with whom my father, through his company, helped out in 2008 so that he could compete in the 2010 Route du Rhum. Pascal had capsized during the 2006 Route du Rhum, his Multi50 was lost off the Azores. He ended up recovering it and wanted to complete the famous Transatlantic as it was unfinished businee. I found the story fascinating: it was unusual in terms of the race especially since Pascal had built his boat himself with his friends. So what made me want to go offshore is the idea of ​​managing a project as a whole not just going racing on the oceans.
The open sea has become a project for life…. “Slowly it has, yes. The transition was long! I have been working as a technician since 2010 and then embarked on a Route du Rhum project in 2013, supported by my company, motivating and supported by some customers. I took three months leave to experience this. I met VandB, proposed the chance to build a new Class40 and I create a company that has two angles…. sailing on the one hand and public engineering work and building on the other. From 2015 to mid-2017, I continued to work answering tenders, until my drive to achieve sporting results took over and I decided to devote more time to the boat. It was good not to stop my job right away: it allowed me to find partners." 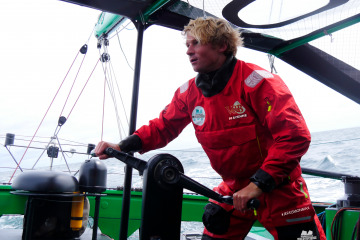 © Jean-Marie Liot /V&B MayenneThe experience I am most proud of: "Being at the start of the Vendée Globe will make me so proud, but this would not have happened without the Transat Jacques Vabre 2015 and an incredible turning point. With Sam Manuard we started and raced a boat that was launched two months before and we finish second behind Pierre Brasseur and Yannick Bestaven. My partner then said to me: "Well you made second now you only have one thing to do: finish first! "I had to explain how difficult it is to guarantee a victory in offshore racing… and despite everything, I won the 2017 edition with Antoine Carpentier despite technical problems at the start, and with only 18 minutes of a lead on the second!"

My Vendée Globe And Me
My ambitions: “To close the loop. And to share the message of the l’association Vaincre la Mucoviscidose, (Defeat Cystic Fibrosis) loud and clear, and give hope to the sick by sharing the idea that nothing is impossible".
A weak point (apart from breakages) which could rob me of that dream: "Injury the only thing other than a breakage…".
My secret weapon: "The little community that I have managed to build round me since 2014, and the partners around me. They are always with me".
My success would be: "To finish it with a desire to do it again. And if there was to be a podium in the unofficial competition between non foiling boats that would not be bad…”
I want to share... "The adventure and the emotions that I will experience, all of it. We are in that era we want to show more than before, but it is difficult to show what we really live, especially when we are fighting for the podium. However, people do want to understand what we are going through. It is up to us to learn how to share it”.
My three words to define the Vendée Globe: “Mythical, crazy, incredible!"
My three images that sum it up: “The descent of the Les Sables d’Olonn channel; the Dantesque seas in the big south, the grey ceiling, wind everywhere, tiny sails and maybe a prayer for those who pray; the return back up the channel and the party that follows!"
I wouldn't go around the world without... "Without thanking each member of the team. They all go out of their way to make sure everything goes well, with lots of energy. It's a real adventure."
For the environment... "I will drop transmitters to analyse of currents, salinity, sediment and  weather. Yes, they will weigh down my boat at the start (during the Vendée - Arctic - Les Sables d'Olonne, the buoys weighed 19 kilos), but it is a weight that we consider worth it."
My observation: "It was only last year only realized what the words ‘without assistance and nonstop’ really mean. This mention changes everything, in a race preparation, and very few people see the difference. You have to be able and know how to do everything on board, and this is an important part of the Vendée Globe philosophy. The goal is to achieve this level of independence and self reliance."