Sébastien Destremeau recreates the mast walk to fix his windex

Message from Sébastien Destremeau (Merci) received on the night of December 3 to 4 who went up the mast for a third time to fix an anemometer problem.

"After a long conversation with my brothers last night, we found that the joke had gone on long enough and we said to ourselves that we weren't going to beat about the bush.  Basically, we concluded that the best thing would be lie the boat down on its side to make the climb easier. In other words, to set the sails against the sea and let the keel hang as much as possible. This morning there were 25/30 knots, so it was not possible, but by the evening the wind dropped below 20.

The sea was still choppy and it was going to be rough up there but the idea was to go up on the mainsail and not by the mast which is extremely dangerous to get knocked about on..

As a result, with the boat lying down it was a bit like walking on the mainsail which was above the water. It was quite impressive, but it worked very well. 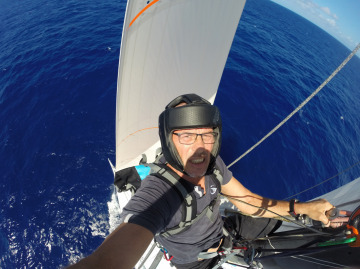 I was able to reach the top without hurting myself too much and discovered that the anemometer wasn't broken but just disconnected. So, I reinforced it and came down almost as if on a slide down the mainsail. I am so happy that this job done and to celebrate had good meal of beef and carotts."