The Ocean Race Europe Sees The IMOCA Fleet Back in Action

For the first time since the finish of the Vendée Globe, five IMOCAs will return to the race course as five teams line up to compete in "The Ocean Race Europe", a new, crewed race with stopovers on a course linking Lorient in France and Genoa in Italy. It is a format which has been tried before in the Mediterranean and off the Atlantic coast but for sure it is a new challenge for the current generation of boats and sailors and a very welcome opportunity after the longest non stop solo challenge round the world. The race starts this Saturday, May 29th.

The total course distance is 2,000 miles with legs to Cascais (Portugal), to Alicante (Spain) and Genoa (Italy). "It's a course we all like the look of," enthuses Sébastien Josse, the ex-Vendée Globe consultant and crew aboard Corum-L’Epargne. “ It'll remind us a lot the Solitaire du Figaro and it's a really nice schedule, four days at sea, stopovers to rest and enjoy a little more. And from a sports perspective, it's going to be super interesting. "

"We are leaving for a beautiful race with pleasant legs and stops" adds Thomas Ruyant (Linkedout). And then it promises a great race”. Co-owner of The Ocean Race, Johan Salén says: “This is an idea that we have had for several years. The health crisis having shaken up our calendar we thought it was the right time to get going and get racing and start off with this competition ".

The event is the first stage of the new 2nd edition of the IMOCA Globe Series, a championship which now includes crewed races for the first time. It will go through until 2025, so 4 seasons instead of 3, and will be based on a new points system which aims to further reward participation in races. Of course, five months after the Vendée Globe, Johan Salén recognizes "the timing is not easy" for the IMOCA teams. 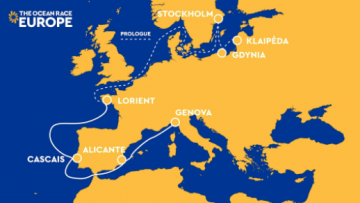 And yet, they are five teams who have answered the call and share the billing with seven VO65: three having competed in the Vendée Globe (Corum-L'Epargne, LinkedOut, Bureau Vallée 3, the ex-L'Occitane in Provence) as well as 11th Hour and Offshore Team Germany.

It promises to be a good, engaging battle. “The game is completely open,” emphasizes Thomas Ruyant. “11th Hour has trained and optimised a lot with crew, Louis Burton has a very fast boat, Corum-L’Epargne can do well in light weather. It will be exciting! "

Ruyant, who finished 6th in the Vendée Globe is looking forwards to doing battle with a crew, with four people on board (five for those who wish to be accompanied by a mediaman). “I find it super interesting. This will make it possible to compare experiences, to look for new ways of sailing and racing and set ups, to feed off each other's knowledge and skillsets ”. A crewed race aboard an IMOCA, boats that are after all designed for single-handed or double-handed racing is a challenge in itself. "There is not a lot of space, the ergonomics are compact, there is only one winch pedestal," says Sébastien Josse.

The organization aboard will generally see two people on deck, one resting, another studying the weather files. And all hands on deck, all four up and in action for the big maneuvers.

"Many of us have done crewed races or the Volvo Ocean Race," notes Pascal Bidegorry. “Working in very close contact with your teammates is something we all know! "

In addition, each crew is mixed. The female sailors competing include Clarisse Crémer aboard Linkedout, Justine Mettraux at 11th Hour, Marie Riou with Corum, Pip Hare on Bureau Vallée 3.
"We had already instituted this principle in previous editions of the Volvo Ocean Race and there was no question of going backwards", emphasizes Johan Salén. "We always prefer when it is just happens but it is going in the right direction," laughs Marie Riou on the pontoon in Lorient.

One of the aspects to follow will indeed be the performance of IMOCAs in the Mediterranean, which is not really their preferred playground.

"These are not boats that are designed for here," says Sébastien Josse. “The conditions are very variable in the Med especially and it it is necessary to race in very localized weather phenomena. This requires is being very attentive, constantly adapting and on the lookout for opportunities when they arise. "

"There is a lot of instability and that will make for an even more interesting fight," says Pascal Bidegorry. "On flat seas and light winds, Corum-L’Epargne may have a slight advantage," adds Thomas Ruyant.