Home News Wish You Were Here…Skippers Postcards From Their Summer

Wish You Were Here…Skippers Postcards From Their Summer

"What are you doing for the holidays? I’ll not be going away from home". Alexia Barrier is smiling. The sailor from the south of France who finished her Vendée Globe in 111 days is looking to take a little time off to relax this summer that is in between sailing, looking for partners and staying on the ball, in fact the same as many of the other skippers.

Most of all summer is giving the skippers a bit of respite, whether that is a few stolen hours here and there, a few days cruising or in the mountains, or a delimited block of time when the office is closed and all activity ceases. But really the biggest problem is to switch off completely when the deadlines are numerous knowing that the countdown for the next edition has already started and there are races upcoming in the second half of the year.

"I have my nose to the grindstone, as always" (Pip Hare)

In July activities are very intense", explains Stéphane Le Diraison who has embarked on "an ambitious project for the Vendée Globe 2024 with a new boat that is more competitive and environmentally efficient". While he will unveil the details this autumn recent weeks have been taken up with "discussions with the partners, with the designers" whilst also going sailing with individuals who helped him during his last Vendée Globe campaign ”.

Briton Pip Hare is, as ever, full on this summer, prepping her new boat, the former Bureay Vallée which has just been rebranded in Medallia colours and is out of the shed. "I will try to put my boat in the water at the end of July and bring it back to Poole (in Dorset, England). Then I will learn to sail it better between August and December ”. Pip says she wants and needs a holiday but "I have my nose to the grindstone, as always

Fabrice Amedeo has also been active in recent weeks. His boat was back in the yard after an incident in early July. Then he began a tour of France to carry out microplastics readings in order to make them available to the scientific community. And at the same time, as he announced that he was teaming up with young Lois Berrehar for the Transat Jacques Vabre as well as "recruiting the rest of the team" for his next round-the-world Vendée Globe.

Getting Ready for the Rolex Fastnet Race

For Sam Davies, too, July has been busy. She rode a stage of the Tour de France for the initiative of Mécénat Chirurgie Cardiaque alongside Maxime Sorel in Laval. But now, she is actively preparing for the Rolex Fastnet Race with Nicolas Lunven. “We have been sailing a bit together for our first times . Preparation time is a bit short - the race starts on August 9th - but we are moving forward! " 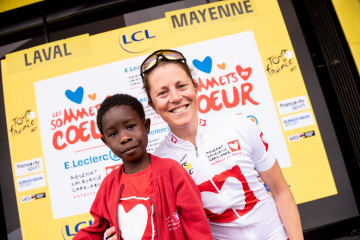 Alexia Barrier will also compete in the Rolex Fastnet Race with Manuel Cousin. She will work with him until the end of the year. And for this duo, time is also running out. "The boat is in the yard at Mer Agitée and we will get it back quite late, just enough to manage our preparation". But the sailor is ready, she who has resumed physical preparation a month and a half ago. “I do a lot of cycling around my region which is lovely between the sea and the mountains”.

And in the air, working!
Summer for STARK’s skipper Ari Huusela has been busy. He is now back to his full time day job as an airline captain at Finnair. His return to work training took several weeks in June and his first flight after more than one year away from flying was in midsummer.
In July Ari had the honour of flying the Finnish Olympic sailors to Tokyo. (see photo) First athletes to fly were the Nacra17 sailors Sinem Kurtbay and Akseli Keskinen. Then it was windsurfer Tuuli Petjä-Sirén’s who joined Ari in the A350 cockpit. Tuuli is of course a London 2012 silver medalist and she has already said that Paris 2024 is in her sights too.
Apparently many, many race fans have missed the Super Happy Sailor updates. Ari’s loyal ship the STARK IMOCA is now for sale. She is in good hands, being looked after by Arnaud Boissieres’ team in Les Sables d’Olonne. Ari says the boat is inreally nice condition and ready to go again and has much much more potential than what he chose to use. And It was only this week - late July - when Ari finally went sailing for the first time after the Vendée Globe, that is 4,5 months later. He says it was pure joy.
Between his flying Ari is enjoying the wilderness and the peace of Lapland, biking and hiking. For sue he still seems to be in adventure mode. 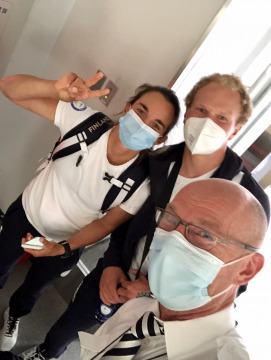 Barrier has been on the water too on her IMOCA on which she did her Vendée Globe. She is offering eco-cruising between the mainland and Corsica to those "who do not want to take either the plane or the ferry". "It's great to develop this and it will be a retirement activity of my 'Penguin'"

Alexia does not have time for holidays. "I don't go on vacation but I try to rest and spend time with my family." And she laughs: "What are you doing for the holidays? I will be at home and everything is fine on board! ". She also takes the opportunity to look for new partners for her next Vendée Globe as her main partners have chosen not to continue.

Alan Roura, too, is actively looking for sponsors as La Fabrique decided to stop the adventure. "It's a pretty complex situation and there's a busy schedule between prospecting and running the business," he says. The Swiss skipper who is making many trips back and forth to Switzerland admits that "it is not easy to go on vacation and cut communication and work without having more certainty about the future". However Roura went to Annecy for a few days with his family. He also plans to visit Greece in September with a couple of friends. "It will do me good to leave France for a bit and above all, it is important, to take some free time".

Fabrice Amedeo intends to take a break for the first half of August and he will be on the water. “My uncle is lending me his boat. We will leave with the family from Collioure (SE of Perpignan on the Med coast). We will either go to Corsica or the Balearics, we will decide at the last moment. Meantime Sam Davies has planned to take a break "the second part of August". The Initiatives Cœur skipper who has not taken more than five days 'off' since the end of the Vendée Globe" wants to "take a family break". "We're not going to go far, we're going to stay in our lovely Brittany and spend time on the water and on the beaches," she laughs.

That is similar too to Stéphane Le Diraison who is heading for the Mediterranean. "I promised myself that I would give myself a real break, four full weeks without my phone, not looking at my inbox, and going cruising with the kids. We will take the time to appreciate the coast, we will sleep more than 20-minute sessions like you have on the Vendée Globe and all in all I am looking to reach Autumn in great shape."

Meanwhile over 17,000 km away, Sébastien Destremau is in New Caledonia. Confined to a hotel for a fortnight at the beginning of July, his programme now is varied. "I am going to give lectures and prepare a play that we will perform on September 10 in Noumea. In addition, I go to Lifou Island to deliver internships for young sailors ". At the same time, he is preparing his IMOCA, Merci to compete in the Sydney-Hobart next December. In 1998, he had already participated in this legendary race. "It is the great classic of the southern hemisphere," he says. Then, the boat will return to France and Sébastien, like many skippers, aspires to participate in the Route du Rhum in the fall of 2022.