Stéphane Le Diraison is an engineer. He loves opera, history books and would like to complete his second Vendée Globe in 80 days or less.

My studies: University course to complete a master's (master 2) in mechanical engineering. Then a 3rd cycle at Arts et Métiers in Bordeaux, specialising in mechanical and composite materials.
My first stage: Even though I have always sailed a lot, until 2015 I had a "real" professional life. I worked in different sectors of business specialising in engineering for large boats. My last position as an employee was being responsible for marine renewable energies at Bureau Veritas. I was in charge of the offshore wind power industry.
Discovering the sea and boats: I was still in my baby cot. I grew up in Lorient. When I was very young I took to the sea with my parents, on a 20ft/6m Jeanneau Flirt. We went to Belle Ile, Groix, Glénan, my dad was passionate about it.
My desire to go offshore. There was no obvious start. It is an integral part of my life. In Lorient, my neighbours on the pontoon there were VDH (Jean Luc Van Den Heede) and Alain Gautier. I watched them with growing curiosity and witnessed the passion which drove what they were doing. But what ultimately really got me going and thinking was a bike accident that I had when I was 16 years old. I spent many weeks in the hospital. It coincided with the period that Alain Gautier was competing in his second Vendée Globe. I followed it all in the newspapers. I projected myself out there. It was a big trigger to my dreams. This is where I really set the foundations of my idea that I would be there one day. There was a definite a before and after change to my mindset around the period of this accident. I suddenly grew 10 years in maturity. In some respects it felt like a second chance I’ve had in life. It made me much more determined in everything I do. I know why I do it. It was fundamental to my life since, to my journey.
Ocean racing is my life project. As soon as I was out of the hospital. I bought a wreck when I was 15 years old. I had started to sail on it with the desire to go solo. Even at 15 I was already filled with the desire to be out on the water. But I was very humble, I had everything to learn. I had no experience or racing. So I rolled up my sleeves and served my time on a bunch of different boats. I built up methodically: Mini series, Proto, Class 40 then IMOCA. At the 2014 Route du Rhum in my Class40, Pierre-Christophe Baguet, the Mayor of Boulogne Billancourt, challenged me to be at the start of the 2016 Vendée Globe.
One result or experience that makes me proud: The Vendée Globe 2016. To be at the start in such a short period of time was a massive challenge. The only real certainty that is inherent in every Vendée Globe is the size and scale of the challenge we set ourselves. The thing is to face up to whatever happens. And you do that knowing that in more than 50% of cases you won’t make the finish. Despite everything it was an extremely strong experience. My pride is to have respected that pact, to face up to and deal with everything that comes along. The boat was dismasted south of Tasmania but I managed to sail it alone to Melbourne with the feeling of a job well done. Melbourne was just a stopover before the next Vendée Globe! 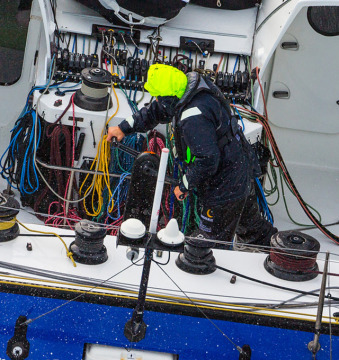 My ambitions: Around the world in 80 days. Because it’s a symbol. It is also a time which means that I would be in the race, in the match. For my boat 80 days is an ambitious goal that requires flawless, clean, inspired navigation.
What would prevent me from reaching my goal (apart from breakage): I have a 2008 generation boat. Even if we optimised it more, turbo’d it more it gained in performance, it will always be a 12 year old boat.
My main weapon: My experience in 2016. When we experienced such a severe damage in such severe conditions. My way of worrying about and dealing with bad weather is no longer the same.
What a successful Vendée Globe would be for me: When I cross the finish line to then feel like I have given everything and have gone to my limits, to have drawn on unexpected, unknown energies.
What I want to share: The emotion of this adventure. Sailors are often modest with their emotions. I would like to share them whilst still remaining true to myself. That doesn’t mean that I’m weak, but I don’t want to be trotting out “all is well”. You have to be honest in this sharing.
In three words, the Vendée Globe is:  An Exceptional Challenge
In three images, the Vendée Globe is: the finish of Ellen MacArthur. She is second, but she seems to be the winner. She had gone after what she could do. The performance of Yves Parlier with his mast repaired. Michel Desjoyeaux's 2008 career, his sheer determination. It was a lesson in the strength of the mind.
I wouldn't go around the world without: Books. Because when you are away for so long, you don't have the opportunity to switch off. You have to be able to get off the boat virtually. It is also a factor in performance, the possibility of taking a step away momentarily. When I open a book, it's like I'm getting away from the boat.
For the environment: Time for Oceans joins up my former life as an engineer for sustainable development and my passion for the sea. My goal is to support the partner companies of the project, the area of Boulogne Billancourt and those who live there as they move towards their ecological transition. All partners have decided to come together under the Time for Oceans banner. Our team is also working on the low tech aspect in shipbuilding: thinking about projects without using moulds, reintegrating light woods like balsa, changing the prepreg, curing at lower temperatures, use fiber flax or bio-based resin. For each solution, we look at the impact that this can have on performance and the environment. And we move these two cursors.