Having tried before to make the start of the Vendée Globe, this time Yoann Richomme is well set with a pair of top level co-sponsors, a great set up and a new IMOCA boat in build. The double winner of La Solitaire du Figaro (2016, 2019) and the Route du Rhum (2018) is leading an exciting IMOCA campaign in the colours of PAPREC ARKEA with the construction of their new monohull started in recent days. The boat’s launch is scheduled for early next year with the overall aim of being among the top contenders for the Vendée Globe 2024 crown.

And the festive holidays and January are a bit of a funny time for the ocean racers. It is not usually a time to be on the water but instead it has been a time to make and consolidate plans, to make decisions many of which will certainly impact on the outcome of the 2024-25 race. And all the time there are fresh memories of the exciting conclusion of the 2020-2021 Vendée Globe when ten boats finished within the space of 72 hours, a sharp reminder of how close the race can be and how it might be down to the small things which may decide where a skipper finishes on the next race,

Yoann Richomme, at 38 years old, is among the newcomers to the race who will enter with realistic hopes of winning. He has shown he has an outstanding skillset, naturally fast, tenacious and technically strong in the design, development and optimisation phase and a very strong meteo specialist too. During the last race bilingual Richomme was a regular, accurate and well followed commentator.

“That was a good experience and I hope others will do it again next time, explaining sailing in an educational way,” he explains. But having done his bit ashore Richomme is hungry to be on the water, letting his sailing performance do the talking, whilst sharing as much as he can.

“ The project started last summer with a blank sheet of paper.” recalls Yoann.

There are two experienced well founded sponsors in Paprec and Arkéa who have underlined their commitment by setting up a structure based in Lorient (Team Spirit Racing) with their new boat in build and an experienced general manager (Romain Ménard) employed. 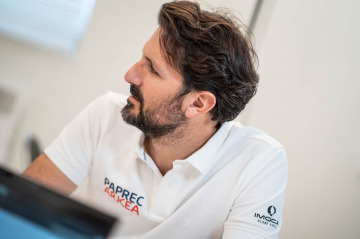 © Yann Riou - PolaRYSE / PAPREC ARKEAThe team continues to grow – it will soon have 12 employees – and it is the strength and depth of experience within this team which highlights their ambition. In particular there is Gautier Levisse, ex-Banque Populaire, Simon Troël, ex-head of development at Corum . The designers are Antoine Koch and the Finot-Conq group who share the design with Thomas Ruyant's new boat (LinkedOut).

And so after seven months of background preliminary design work, it's time to build the boat. It will take a year with the build now underway at Multiplast in Vannes, where the hull of Maxime Sorel's new Imoca V&B - Monbana - Mayenne recently came out. The moulds for PAPREC ARKEA are there already equipped with preliminary carbon shapes. The first pieces were symbolically laid in mid-January, in the presence of the skipper.

"It's a particularly exciting time to see the first parts of the boat be laid down", smiled Richomme at the time.

An English trained naval architect who comes to the Vendée Globe able to really apply all of the "the sum of my experiences " to contribute and shape the whole project as skipper.

"I take as much pleasure in bringing a project to life as in the actual sailing". He knows where he is going.

“We do the things we believe in and know where we are going.” He has a precise vision which has been taken on board by the leaders at Paprec and Arkéa and many of his ideas are already being incorporated into the future IMOCA monohull.

So what is the general philosophy ?

“A boat that is reasonably comfortable and efficient to live in and operate but which performs well,” he explains. “The bow sections are quite rounded to be easy in the waves. Instead of crashing into the wave, the idea is to ensure that the hull, by having volume up front can skim from wave to wave in downwind conditions," contends Gautier Levisse, the lead engineer in the design office.

Throughout the team the maxim is that the devil is really in the detail and nothing can be overlooked.  “ We still have to set up our team structure, to manage the build site, the hull has to be built, the bulkheads structures to be made, the deck to be fixed.

"Being at the very start of a big venture like this is exciting, even more so when the goal is to perform well in the Vendée Globe,” enthuses Simon.

"When a project is so advanced technically we really seeing it unfold at each of its stages", continues Richomme. He plans, like part of his team, to go back and forth between Vannes and his home port of Lorient every week. 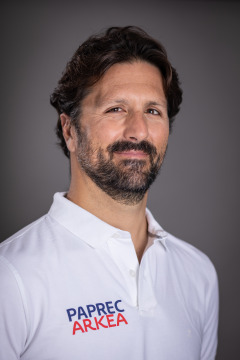 © Eloi Stichelbaut - PolaRYSE / PAPREC ARKEAWatching the skipper walk around the Multiplast build site and talk to members of his team it is his quiet determination that is most obvious. Richomme is not only embarking on the adventure of a lifetime, he is visibly a man on a mission. His experience is valuable, a notable perfectionist and innovator with big wins on the Solitaire du Figaro (2016 and 2019), the Route du Rhum (2018, 1st in Class40) and The Ocean Race Europe (2021, VOR65). He knows all to well that attention to detail counts, even now at three years before starts. And it doesn't always turn out the way you hope.

Richomme remains discreet about his exact sports program for this year, other than saying he will sail between now and the launch of his boat which is scheduled for the beginning of 2023.

He also plans to take some holidays. "It's a slightly lighter year and so we are giving ourselves the latitude to take time," he explains. “Because we know that afterwards, it will be a complete tunnel of constant work and investment for two years”.  And so in effect the Vendée Globe 2024 mission is well under way with more than 1,000 days left before the November 2024 start.