We can see a fairly common situation in the South Atlantic. The St Helena high is split in two with an area of low pressure likely to last for a few days, giving enough time for the first group to pass through.

The choice is clear for the leaders. The trio including Linked Out, Hugo Boss and Apivia turned slightly to slip between the low and the high. They are still sailing in a moderate NE’ly blowing at around fifteen knots, which is allowing them to kep up high average speeds at around 100 degrees to the wind. They will continue to turn regularly during the day to maintain the ideal wind angle. The wind will gradually swing around early in the week. The competitors will then be sailing with the wind from astern in a narrow corridor forcing them to carry out a lot of gybes. 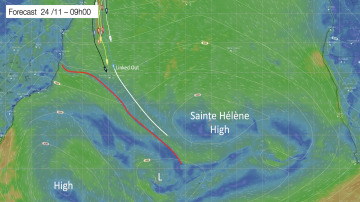 The boats chasing them will have to decide this weekend whether to follow the same route or dive due south. The sped at which the high builds later in the week will probably determine their choices.

The wind has been light since last night in the Doldrums for Didac Costa, Pip Hare, Manuel Cousin and Arnaud Boissières who are likely to be stuck in a big area of calm conditions until this evening. Conditions should start to improve on Sunday for the next batch of competitors entering the Doldrums. 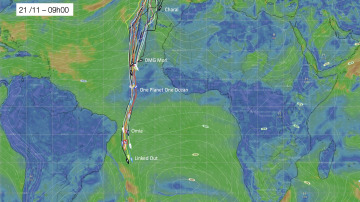 The trade winds are fairly light for Charal sailing at the latitude of Madeira.