Home News Could Maître CoQ perform better than the brand new foilers in the Vendée Globe?

Could Maître CoQ perform better than the brand new foilers in the Vendée Globe?

Jerémie Beyou’s Maître CoQ is going to be a rather different type of competitor in the Vendée Globe. She will be the only older boat to be fitted with foils. Maître CoQ will also be the only one to have benefited from New Zealand know-how in this area. As Jérémie Beyou’s 60-foot IMOCA is not fitted with the standardised rig found on the new boats, the combination may turn out to be very interesting. We found out more from the skipper.

Jérémie, how is work going on Maître CoQ? Does adding housing for the foils mean that you need to reinforce the structure?

"The installation of the housing for the foils, the construction of which was carried out by AMCO in St Philibert (Southern Brittany), is nearing completion and the reinforcements are being worked on by CDK. Reinforcements have been added to the bottom of the hull in the living quarters and we are waiting for the foil housing to be completed in the sail hold to add reinforcements there too. At the same time, we are working on the mechanism to set them up. As we are not allowed to adjust the foils when racing – just raise or lower them – we have to get them set up right beforehand and that requires a lot of work. The foils themselves are being manufactured at Heol Composites in Vannes and are due to be delivered in early April."

Is there any other fine-tuning work being carried out on Maître CoQ? 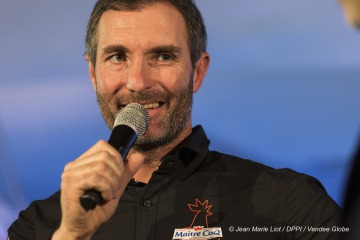 © Jean-Marie Liot / DPPI"Yes. For example, we have reinforced the whole length of the mast, which we had to do, as adding foils increases power. The mast went through the baking process last week. We shall be fitting a new pair of rudders, which will be delivered in late March. There is also some new standing rigging, a new inertia unit, a new hydraulic unit for the keel. When all of the composite work is complete on the boat, we shall fit the new instruments. I will have sensors detecting the strains on each part of the boat, the winches and the outriggers. All of that is connected to the central unit, which means we can be alerted and ease off, when the strains appear to be too high. In other words, when we are pushing the boat too hard. Other boats are already equipped, but we haven’t had any before."

In that case, the boat is still in bits at CDK?

"For the moment, yes, but work is advancing very well. We are on schedule at every level. That is very pleasing with so many different people involved."

On paper, she should perform better than a new boat?

As for the design of the foils, you are making use of the expertise available in New Zealand…

"Yes, we worked with Nick Holroyd, the former head of the Emirates Team New Zealand design team, in other words, the best you can find in the America’s Cup. He has brought along a wealth of experience. We were able to plan everything and do the work well with everything being coordinated in our team by Pierre-François Dargnies. To be on time with this, it was vital to work with designers, other than those working on the new boats, as they were bound by an exclusivity contract until the end of January 2016. VPLP-Verdier is now also involved, but merely in checking things over afterwards (Maître-Coq is the VPLP-Verdier design that used to be Banque Populaire, editor’s note). Fortunately the foils can be made somewhere other than in France!"

Does that mean that the foils on Maître CoQ will be different from the others?

"Not necessarily. As, firstly, even if we were thinking of L-shaped foils at the start, the geometry of the moustache is likely to be fairly close to what we have already seen, and on top of that, those, who have new boats will be developing the foils with which they started the experience. As for us, based on studies of the performance of the new foilers, we tried to reduce the speed deficit that could be seen when sailing upwind. It’s clear, we are trying to rectify this handicap. As the problem is not trying to go faster, when you are already doing 24 knots downwind… but rather to take off that bit sooner and reach 14 knots, when sailing upwind, where we were held to 12 knots before. That’s where the biggest gains can be made in terms of potential performance. That’s what we are trying to achieve." 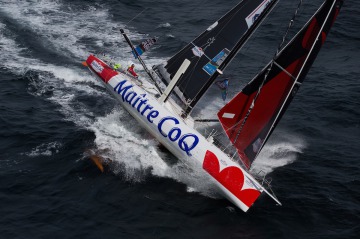 © Jean-Marie Liot / DPPI / Maitre CoQUnlike the new boats, does the fact that you don’t have a standardised rig on Maître CoQ change anything?

"Yes. Because our rig is designed to get a higher dynamic righting force, we can imagine foils that push that bit more. In theory, on paper, we may perform slightly better than the new boats. But a word of caution, that is just the theory, as to achieve that requires a lot of reinforcements… which means adding extra weight. Once again, we are trying to find an ideal compromise here. Let me say it again. The foils on the new boats will also be further developed this year."

So, in the end, you have a boat that is capable of winning the Vendée Globe?

"That is what we set out to do. In any case, we’re spending a lot of energy to get there, yes."

What is your programme between now and the start of the Vendée Globe?

“Maître CoQ is due to be relaunched in a month from now in the first week of April. The month of April will be given over to speed and performance tests and getting used to her. Then, we will sail her across the Atlantic to New York with a crew, which should allow us to continue to fine tune her. After that, I shall take part in the transatlantic race from New York back to Les Sables d’Olonne. We have planned to carry out checks on her in the yard for two or three weeks in early July. Finally, we’ll get her back in the water with four months to go to the big one and that means we’ll be on the final stretch before the start of the Vendée Globe.”