> News > Stéphane Le Diraison: “I’ve been working towards this”

Stéphane, our first question is quite simple. How far have you got with your Vendée Globe project?

“In terms of the preparation, we carried out a big winter refit. I have an excellent boat, the old Hugo Boss, a Finot-Conq design, which was the first IMOCA to sail 500 miles in 24 hours in 2008. For the general public, she is also the one used to film those famous images of Alex Thomson standing on his keel in his suit.  We haven’t done any major modifications, but we have got her back in good condition from top to bottom. We have been reasonable about this, as it can be very tempting, when you have a boat like this, to think about changing everything, the keel, daggerboard housing, etc. I know she is a good boat. I saw that when I sailed her back from Poland last winter. I went around Europe to take her down to La Ciotat (near Marseille). And I had to deal with 45 knots of wind in the North Sea.”

So you preferred to do a thorough general refit, rather than carry out major modifications?

“Yes, I think we haven’t done too badly. The boat is what you might call a vintage one that is as if brand new (laughs). More seriously, I have a good team around me. For example, I had the engineer, who designed her mast work for me. The Conq team helped me out too. We managed to do a decent job and the boat is in looking good and ready to go, just like she was 8 years ago. I carried out the work at a yard with one of my partners in La Ciotat. And now, we’re based in Lorient.”

“I’m not about to withdraw”

For financial reasons, you were unable to take part in the New York-Vendée. What happened?

“I got the boat very late on. We had left ourselves a little time, but that vanished when we had some very bad weather in the Mediterranean – a lot of strong Mistral winds – which meant we lost ten days or so, as we could not step the mast or test her. Consequently, we couldn’t keep to schedule and arrive in New York in good condition. That’s why I’ll be getting my qualification, racing as required, by sailing solo in the Quebec-St. Malo race in July.”

How are you setting that up? 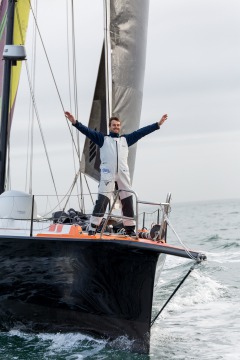 © Adrien François“We shall be doing the delivery trip in a few days from now from Lorient, with a short-handed crew, with my shore team. We’ll be going to St. Pierre and Miquelon, as it is at this race mark that I will join the fleet of the Quebec-St. Malo race, obviously as agreed with the Race Directors of that race and those of the Vendée Globe. I’ll do the transatlantic crossing alone, with the main priority being to cross the finish in St. Malo. Obviously, I’m not going to take any risks. That’s how I can tick the final box in my qualification for the Vendée Globe. I’d like to put an end to the rumours doing the rounds on the pontoons. I am not about to withdraw! I’m on the list of the first 27 to have registered (25th to be precise) and I’ll definitely be there at the start in Les Sables d’Olonne in November.”

How far have you got in finding the funding?

“I set myself a financial target which I reached thanks to six partners, which means I can say for certain that I’m going to be at the start of the Vendée Globe. As time has gone by, the budget has increased, as for example I have invested in a full set of sails. So, I’m looking for additional funding now to enable me to set off in the best of shape. There is a major asset on offer to do that. For the moment, none of my partners have given their name to the boat. I am offering it for 400,000 euros, which seems very reasonable for a turnkey project of this size. I’m currently in talks to complete this process, which should allow me to do things in the best way possible. The name could be purchased by one of the six partners that I already have or by a new sponsor interested in becoming the headline partner.”

Who are your six current partners?

“The town of Boulogne-Billancourt, where I live, which has been following me for five years and is behind the project; Bureau Véritas, who is my main employer (Stéphane is an engineer there in charge of the renewable marine energy service) who are allowing me to take a year off to do the Vendée Globe; Ixblue, a high-tech electronics firm, which also owns the yard, where I did the boat’s refit and which is supplying me with high performance sensors; Sade, a waste water treatment company; the property arm of BNP Paribas; and finally the law firm, Lafarge & associés, who are enthusiastic and fascinating people, who already followed me during one of my transatlantic races back in 2012. Together, we can write a great story coming to a climax with the Vendée Globe.”

How are you organising your training?

“I’m sailing two or three days a week in Lorient, the town I originally come from. I did a lot of sailing this winter, particularly with the delivery trip. I have already done almost 7000 miles aboard the boat and if you add in the next two transatlantic crossings – the delivery trip and the Quebec-St. Malo, I’ll have clocked up almost 15,000 miles, which is quite something.”

We know that you used to race in the Mini 6.50 circuit and then on a Class 40, but where does this passion come from that has led you to the Vendée Globe? It’s not the easiest of questions maybe…

“It’s an easy question for me though. Maybe my training as an engineer means I am very logical, taking things one step at a time… but for me it is simply a logical career path. Firstly and it’s the most important thing, I love the sea, being on a boat all alone. I started solo sailing when I was young, at the age of 15. But not sailing dinghies. I don’t come from an Olympic sailing background. In fact, I recovered a wreck from a mud bank, a little 6m boat. My father taught me how to repair her and thanks to that little boat, I discovered my passion and the enjoyment of being at sea. To start off with, it was all very modest. I went across to the islands off the coast. Then, gradually, I sold my boats, did up bigger ones and was able to head further away to Portugal, Spain and England… Before competing in the Mini and Class40 circuits, I had already clocked up a lot of miles sailing solo.  So, setting off around the world in the Vendée Globe, the longest and greatest race course, seems logical to me. It’s something I have been working towards.”