Operational in 2021-2022, this offshore wind farm located between the islands of Yeu and Noirmoutier will be able to produce 500MW of electrical power, which is the equivalent of the consumption of 700,000 homes (population of the Vendée department), or the same as the production of half a nuclear reactor.

Shared values and commitment to the local area in Vendée 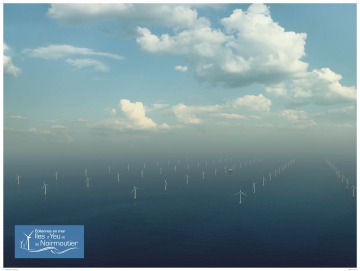 At the press conference organised today (Thursday), Yves Auvinet, President of the SAEM Vendée declared in particular, “It’s the same wind, which turns the turbines out at sea and propels the Vendée Globe boats as they make their way around the world. We are therefore pleased that the Eoliennes en Mer des Îles d’Yeu et de Noirmoutier company, which is developing an offshore wind farm off the coast of Vendée, is supporting the Vendée Globe. We share the same values as the sailors who during their voyage around the world, will challenge the winds on the world’s oceans.”

“Éoliennes en Mer des Iles d’Yeu et de Noirmoutier is proud to sign this partnership in order to bring together our values with those of the world of sailing, in other words, being close to people, showing commitment, innovating, achieving excellence, values that are key in the development of this offshore wind farm,” declared Raphaël Tilot, Director of the Éoliennes en Mer Iles d’Yeu et de Noirmoutier project. 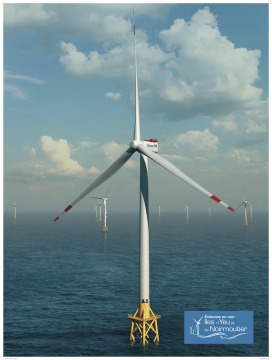 This partnership is part of the Vendée Council’s New Energy programme, which involves an investment of 4 million euros over three years (2015 to 2017) with the aim of ending up producing 50 % of the electrical energy consumed in Vendée using renewables.

Another goal in this plan is to make the local population in Vendée aware of the importance of saving energy, and showing them the various sources of renewable energy available in Vendée (solar, wind, methane, geothermal, marine energies…). The first major feature, the offshore wind farm off the islands of Yeu and Noirmoutier will give a major boost to the development of renewable energy in Vendée.

By joining up with the 2016-2017 Vendée Globe, "Éoliennes en Mer des Iles d’Yeu et de Noirmoutier" is continuing with its involvement in the development and promotion of sailing in the area. Raphaël Tilot explains, “We wanted to show our commitment to Vendée and the Department, in what represents one of the most emblematic events in the area. With this partnership, "Éoliennes en Mer Iles d’Yeu et de Noirmoutier" is keen to show how committed it is to the local area and the projects, which make it so well known.”

The wind farm project on display in the Vendée Globe Village
The "Éoliennes en Mer Iles d’Yeu et de Noirmoutier" company will be present with its shareholders, ENGIE, EDPR and the Caisse des Dépôts at the Vendée Globe Village, which opens its doors from 15th October to 6th November 2016. The general public will be able to discover the offshore wind project, its role in energy transition, but also what is at stake here and the consequences for the Vendée area. "Éoliennes en Mer" will also be present at Race HQ at the foot of the Eiffel Tower in Paris throughout this event.