> News > How the skippers communicate with those ashore

1. Communicating with the media

Ocean racing involves a mixture of ingredients: sailors with their boats and shore teams, organisers, partners and of course, the communications around the event, without which there would be no sponsors and therefore no race. Organisers of all major races are well aware of that rule. That is why the Vendée Globe skippers have over the years become such good communicators. Not only do they take part in the radio sessions, but there are other audiovisual obligations. For example during each week of the race, the sailors have to take at least seven photos, carry out at least two live video conferences, send back at least twice two minutes of pre-edited film taken using the cameras that are fixed on board or mobile cameras with shots inside and outside the boats.

To achieve this, sailors are now equipped with equipment that is smaller and smaller and more and more efficient, particularly in terms of bandwidth and speed of uploading. Rules define the minimum requirements in the Race Instructions. They can take more on board, but not less. A few rare skippers, like Sébastien Josse (and possibly Tanguy de Lamotte and Eric Bellion who will decide at the last moment) are taking a drone aboard to try to take external footage of their own boat, but this equipment can only be used in decent weather. 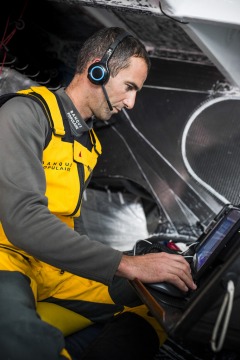 To send e-mails and have phone conversations, the skippers must have an e-mail system on board and two other means of phone communication via satellite, in other words an Inmarsat C (also referred to as a C Standard) and an Iridium, in addition to a mobile Iridium phone in the survival kit, in case they have an emergency. Race Instructions make it compulsory for the skippers to leave their Inmarsat C and their Iridium on stand-by at all times. These telephones or the Fleet system are also used for the daily radio sessions. Then, to communicate from boat to boat over a short distance, the skippers must be equipped with a VHF radio, which also sends out an AIS signal, which can be picked up by near-by boats. In practice, the VHF set is rarely used in the Vendée Globe, except when one competitor is rescuing another. But the AIS function is potentially very useful, when they are close together, as they can identify the speed and bearing of their rival, even if this only works in a radius of around 25 miles.

. The Fleet 250. These can be recognized by the cylindrical antenna on the stern of the boat. Their size has been reduced with each edition of the Vendée Globe – this can be used for phone calls, but is used in particular for sending photos and videos and audio as a file or live, making the most of the satellite communication possibilities on board. This is how video conferences can take place and viewers can see what life is like aboard the boat. This equipment is so important that certain have two of them in addition to their Iridium and C Standard. That was the case last time for the winner, François Gabart and this time for Vincent Riou among others.

. Photos and videos. The skippers must have at least two fixed cameras on board (inside/outside), a watertight mobile video camera and a watertight HD camera. The fixed cameras (one of which is usually fixed to the nav desk) can be shifted to live mode for video conferences. There is also all the different software for recording, editing and encoding video and audio before sending it off. The sailors had compulsory training in these techniques before the start.

3. Communicating with the team and friends and family

Some skippers are very much at ease with video, others less so. In the last race, Jean Le Cam and Tanguy de Lamotte – among others – won over the public on social media boosting their videos from the boat. Some skippers have regular reports to file with schools or for educational programmes. In any case, each skipper has to talk to his shore team about the technical aspects and with his communications team or press attaché to publicise his race. Often, partners organise radio sessions with their skipper for their internal or external communications requirements.

Some skippers like talking a lot with their friends and family, while others keep it short. Some prefer e-mail, while others opt for a phone call. They need to take into account the time this takes and of course, the bill at the end for satellite communications. Their calls will depend on weather conditions, the condition of the boat, their mood, whether or not they want to talk and if they have anything new to say. Eric Bellion plans to call three times a day. In the morning he will call up his technical director, at lunchtime his communications manager and in the evening the General Director of his project. However, Arnaud Boissières doesn’t really like the phone and so has warned everyone that if he doesn’t call, all is well. “The first week is the sprint to the Equator and I don’t feel like communicating then, so just send back a short mail now and then later in the race however, once we have rounded the Horn, I tend to call more often.” 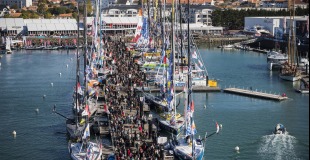 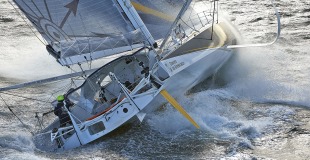 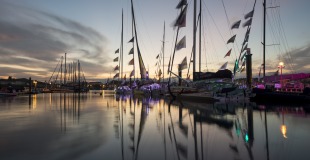 Vendée Globe Views Round the World