The latest forecast is for a few squalls, cloudy skies and a 10-15 knot NNW’ly for the 29 solo sailors starting the 8th Vendée Globe on Sunday at 1202hrs UTC. The IMOCAs will quickly be heading towards the SW pushed along by a 15-20 knot northerly until they round Cape Finisterre.

The first foilers should be in that area on Monday morning. “It’s not as worrying as when a front passes over. You can feel that on the pontoons, where the atmosphere is not as stressed. It’s going to be fast and very intense, particularly with all the shipping and fishing boats and around Cape Finisterre, where there are often objects floating around,” said Jérémie Beyou (Maître CoQ).

Alex Thomson, the British skipper of Hugo Boss commented this morning: “They are saying North, North Westerlies. It not clear how much wind there will be at the start. Then it looks straight line to Finisterre.  And then if we can straight line to get under the Azores High is not really fully confirmed yet. For us, the foilers, it could not be better. If I could as for the weather this is what I would ask for.” 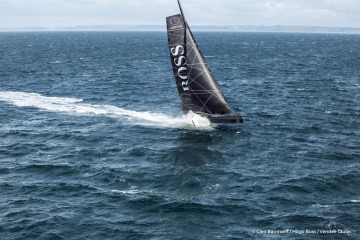 The wind will strengthen as they make their way down the coast of Portugal, with some gybes required. In short, we can look forward to a quick start, but one that is going to be very technical. “Those who have done a lot of training will be up there at the front. There will be an advantage for the foilers. But we’re going to have to wait and see whether people get 100% out of their boats or not.” There will be a ridge of high pressure developing between Gibraltar and the Canaries around midday on the 8th November, which could shut the door on those who are left behind. From the outset, the skippers will want to put their foot down to get away from this area of light winds associated with the high.