François Gabart won the last edition of the race after 78 days 2 hours 16 minutes, setting a new race record. He has just visited the pontoon in Les Sables. An opportunity for us to ask him a few questions.

What are your impressions looking around the harbour today?

I have memories of eight years ago, when I was a spectator, which is rather strange. The 29 boats lined up on the pontoon remind of what I saw 8 years ago. I’m here as a spectator and it’s a fantastic sight. I don’t really remember what it was like 4 years ago. It’s nice to see some rookies here. That’s a good thing for the race. It’s going to be fantastic for them. You can do as many Vendées as you like, but there is only one first one. It is more intense, when it’s your first. I hope all fourteen will have an extraordinary race and have great memories like mine.

If you had to choose one boat which would you like to sail in the Vendée Globe?

If I had to choose, I’d go for the one I know the best, SMA. I could probably jump aboard and perform well. I’d like to see what it is like on a foiler, as I have never sailed on one. Not to do the voyage around the world, but just for a sail to try it. Maybe Hugo Boss. It’s true I haven’t placed that boat in my favourites, but she could win. I tend to go for Armel, Vincent and Sébastien. Alex’s boat certainly looks good. 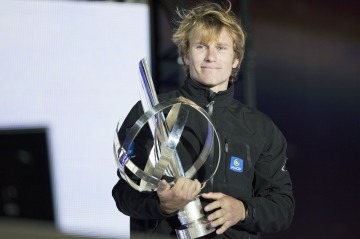 It can be done in a week less than last time. Around 67-70 days. It’s normal that it’s going to be very fast. There is an exceptional weather opportunity all the way down to Brazil this year.