At the front of the fleet the two leaders are sailing at approximately even speeds, Alex Thomson at 16.8kts and Armel Le Cleac'h at 16.5kts. The French skipper appears to have pulled back another couple of miles on the British race leader, the 1700hrs UTC ranking now having Banque Populaire VIII at 58.5 miles behind. Key is that Armel is sailing just a couple of degrees higher than Alex and so theoretically making a better VMG - velocity in the direction of the next waypoint which is to the south and east. Thomson, meantime, is maybe happier with a marginally lower and faster angle because of his sail combination or more likely his routing to meet the best breeze in the low further down the track. But there is really nothing in it…

"So yesterday I started off my live conversation with the Vendee press corps by saying that I had suffered a terrible technical problem when my tube of peanut butter had exploded all over the deck when I was just trying to squeeze some onto a piece of bread. We had a bit of a laugh and the press wished me well and hoped that peanut butter would be the greatest problem I would face during the Vendee Globe.

Karma was swift in its execution however as no soon as I completed the call I reached behind the computer to unplug my headphones when I got a shock off the body of the computer. Rogue electrons are never a good thing on a carbon race boat because carbon is an excellent conductor and if an electrical component is discharging into the boat then the whole of the structure becomes electrified. This is a problem because dissimilar materials (aluminium secured to carbon with stainless steel bolts for example) will corrode very quickly in the presence of an electrical charge and salt water.

I quickly set to turning off all the electrical systems one by one to try to isolate the electrical leak. This meant I had to unbolt various connectors directly on the 12V battery, while dripping with sweat (an excellent conductor), using metal tools and standing directly on conductive carbon fiber! I kept getting shocked and dropping the tools and having to start over again until I found my Gill neoprene rubber gloves in my southern ocean bag and could then work in insulated peace.

The electrical leak solved I then moved on to the hydraulic system for canting the keel from side to side where I had noticed a drop in pressure and oil levels. Having found no trace of leaks previously, I put my hand into the keel box (the wet box in the middle of the boat that allows the head of the keel to pass inside) and found not only and oil leak but that the port side keel ram was unscrewing itself and was almost in pieces!

Imagine a ball point pen where the conical tip screws into the barrel of the pen, but now 1000 times bigger. Fully extended each keel ram is over 2 metres long, weighs 80 kg and can push with 20 tons of force. I had to find a way to screw the end cap back in, with it in place and without the proper tools otherwise my race was finished. Eventually I found that I could file steps in the cap with a metal file to engage a metal rod that I could hammer in a circle to screw it closed. Problem solved. 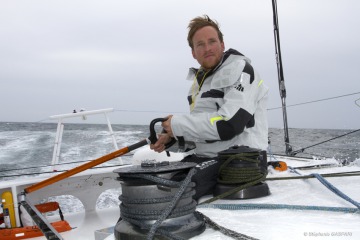 © Stéphanie Gaspari - Groupe BelWith every system functional and the boat fuly powered up and charging south, I finally allowed myself a salt water bucket shower to wash the day off me. As the white soap bubbles ran down my body, washing off the red blood from skinned knuckles, the blue hydraulic oil and the greasy metal shavings the multicoloured mess ran on deck where it mixed with the brown traces of the earlier peanut butter explosion. Perhaps I had been just a little hasty in declaring that split sandwich spread was the biggest problem I would have to face that day!"