After Thomas Ruyant crossed the Equator at 0417hrs UTC this morning, the top ten boats in the Vendee Globe are all racing southwards in the Southern Hemisphere led by British skipper Alex Thomson on Hugo Boss.

Ruyant crossed 1 day 9 hours and 13minutes behind Thomson whose lead this morning is 55 miles as he contains the advance of Armel Le Cléac'h. The leading duo are making between 17 and 21kts of boat speed, fast reaching some 150 miles east of Recife. Projections based on today's weather models show a new reference time to the Cape of Good Hope at two days better than the current mark of 22 days and 23 hours held by Le Cléac'h. A fracture in the fleet is developing after 12th placed Kito de Pavant who was still making 12kts southwards. Behind him, the Doldrums are particularly active, with long periods of calm followed suddenly by 30kt squalls and torrential rain.   Louis Burton, Bertrand De Broc and Arnaud Boissières were all making slow speeds during the night.

The Atlantic appeared to be straight forward, but it has started to shake things up, becoming rather like a shunting yard rather than a high speed train track. In the middle, an area of thundery weather has affected the flow of traffic this morning, while the Doldrums are still playing around with a large part of the pack, who are still looking forward to getting to the Equator. As for Sébastien Destremau (TechnoFirst-faceOcean), after hesitating about a route inside the islands along the coast of Africa, he now appears to be rejoining his fellow competitors off the Cape Verde Islands, while Didac Costa (One Planet-One Ocean) is set to pass Tanguy de Lamotte (Initiatives-Cœur) later today, as the French sailor makes his way back up towards the Canaries at around eight knots, while the Catalan is heading south at around six knots 250 miles away from him. 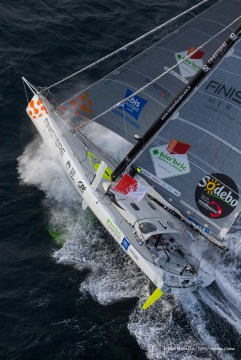 While the leaders soar away at between 18 and 20 knots, sufficiently far off the coast so as not to be affected by the effect of the shore on the wind and to be well away from fishing boats, which trawl a hundred mile strip along the coast, that is probably not going to be the case for the following group: Jean Le Cam (Finistère Mer Vent), who crossed the Equator at 2219hrs UTC on Wednesday, is the most downwind of the fleet and he will be hoping that the  wind backs easterly to avoid getting too close to Recife. The gap between the first seven and their closest followers has widened considerably, as Jean-Pierre Dick (StMichel-Virbac) is now more than 580 miles behind the leader in terms of the route towards Cape Frio.

As for the next little group, only Kito de Pavant (Bastide Otio) has really made it out of the Doldrums with the bulk still stuck in extremely variable winds, which has led to part of the fleet compressing to 300 miles between Louis Burton (Bureau Vallée) and Alan Roura (La Fabrique). This hold-up will mean massive delays with the race now split in two, sailing in very different weather systems, at least until they get to the Roaring Forties…