Home News Josse back on track after rudder drama

Josse back on track after rudder drama

Sébastien Josse had a lucky escape last night after hitting a submerged object causing damage to one of the rudders on his IMOCA Edmond de Rothschild. Josse was in 25 to 30 knots of breeze sailing south east at around 2230 UTC yesterday when his starboard rudder kicked up having hit something in the water.

The 41-year-old Frenchman, who at the time was in second place, slowed his boat to a stop so that he could assess the damage and found the system that holds the rudders down to be broken. With the help of Gitana Team technical director Pierre Tissier, boat captain David Boileau, and Armand de Jacquelot, member of the Gitana design office, Josse was able to repair the damage. He spent more than four hours fixing the rudder system before being able to resume racing but by that point he had lost around 60 miles.

At the 0500 UTC ranking Josse has slipped from second into third and now lies 169 nautical miles behind leader Alex Thomson and 70nm adrift of Armel Le Cléac'h, who moves up into the runner-up spot. The loss of miles is a blow for Josse, who had been fighting hard to stay ahead of the front that yesterday swallowed up the three boats behind him in the front breakaway group. But the fact that he was able to return to racing at all is impressive – Thomson lost a foil when he hit a submerged object while Vincent Riou, who was in fifth place, became the latest casualty of the race yesterday when he retired with keel damage from an unidentified object. Betrand de Broc was forced out of the race after colliding with a submerged object off the coast of Portugal. 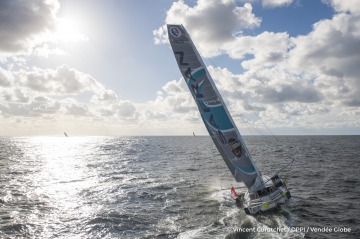 The front three skippers of Thomson, Le Cléac'h and Josse were this morning the only boats still profiting from the east-moving low pressure system, and at 0500 UTC their speeds were an impressive 21 knots. The trio behind them – Morgan Lagravière, Paul Meilhat and Jérémie Beyou – were almost 10 knots slower this morning. Yann Elies, Jean Pierre Dick, Jean Le Cam and Thomas Ruyant were the only skippers not in the leading group of six to be making any reasonable headway, with speeds around 15 knots. The rest were having to make to do with fickle, light winds below 10 knots as their St Helena High ordeal continued.