Home News On course for the Cape

On course for the Cape

Vendée Globe frontrunner Alex Thomson was this morning bearing down on the longitude of the Cape of Good Hope, the next major milestone in the solo non-stop round the world race. Thomson's Hugo Boss is expected to pass 18.4740° E, the longitude of the famous cape on the tip of South Africa, at around 1900 UTC marking the beginning of the next stage of the race – the Southern Ocean. Thomson will have completed the passage from Les Sables d'Olonne to the Cape of Good Hope at record-breaking pace in just over 18 days.

Prior to the race start on November 6 it was expected that it would take the fleet almost 23 days – this is what it took French sailor Armel Le Cléac'h in the 2012/13 edition when he was leading, and that time was a race record in itself. But the leading group have enjoyed near perfect conditions since leaving Les Sables and their passage south has been electrified by a fast moving low pressure system that they have been able to profit from for days on end. Boat speeds for the frontrunners are slowly subsiding from above 20 knots to around 15 knots, but if Thomson passes the Cape of Good Hope at the time expected he will have averaged 15.9 knots since the beginning of the race – the same speed that the 120ft maxi catamaran Orange II achieved on the same passage in 2002, but with a crew of 13.

Second placed Le Cléac'h, 100 nautical miles behind, is tipped to be seven hours behind Thomson at the Cape of Good Hope with Sebastien Josse in third around a day adrift. Jérémie Beyou, in sixth, will be three days behind Thomson. Beyou is currently 'sailing blind' after the antennae that are used to send and receive files, including weather data, broke. “It is hard in these conditions to find the right strategy,” the Maître CoQ skipper said. 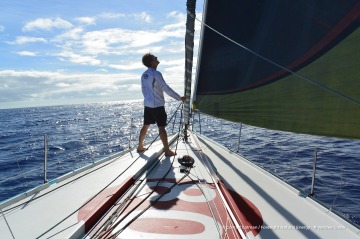 The battle between Jean Le Cam and Jean-Pierre Dick continued overnight as they crossed paths within an hour of one another having found new breeze, some 1,800nm behind the leaders. A further 500nm back a group of 10 boats starting with Louis Burton's 11th placed Bureau Vallée and ending with Arnaud Boissières on La Mie Caline in 21st remained trapped in a bubble of high pressure that will take them another 24 hours to escape. Spanish skipper Didac Costa crossed the Equator at 0015 UTC today, the last of the Vendée Globe sailors to make it into the South Atlantic.

Tune in to today’s Vendée Globe Live show at 1200 UTC where we will be talking to record-breaking yachtswoman Dee Caffari. You can watch the show at https://www.vendeeglobe.org/en/ or on the Vendée Globe Facebook page.

Enda O Coineen (Kilcullen Voyager Team Ireland): “Another day. Slow but solid progress south along the Brazilian coast.  And also, gradually catching some boats ahead after my detours during the first 14 days - at least now we are holding our own - and psychologically I am pacing myself -  somewhat nervous of the Southern Ocean ahead. Why? With economic uncertainty, Brexit, economic problems, housing crisis and hospital trollies, why am I away doing this lap of the Planet? Away from all the daily clutter and 'guff'. Why run such an event at all? Some say it’s madness (and I'm inclined to agree) but that's just a convenient way to describe what we can't describe or something we do not or cannot understand - such as the concept of infinity.”

Upheaval in the South Atlantic