On these islands, several thousand kilometres from the continents of Antarctica, Africa and Australia, ravaged by storms and where nothing grows except a few local cabbages, moss, lichen, wild grasses and acaenas, there is hardly any wildlife. In September 1770, after sailing around the Northern seas from Iceland to Greenland, Yves de Kerguelen offered the Duke of Praslin, Naval Minister for Louis XV, a voyage of discovery of the third world somewhere between Africa and the Indies, suggesting that there was a huge continent stretching out from the Islands of St-Paul and Amsterdam at 40° and 45°S down to the Pole.

The 37-year old officer set sail from what is now called Mauritius aboard La Fortune and Gros-Ventre, with a crew of 300. On 12th February 1772, he spotted a tiny island (Fortune), and on the following day saw land with the tops of mountains covered in snow. It was hard for Rosily and du Boisguéhenneuc to get ashore and take possession of the island for the King. Bad weather blocked them and the captain of La Fortune headed back to France leaving the Gros-Ventre there. Yves de Kerguelen reached Brest on 16th July 1772, proud to have discovered the fifth part of the world.”The land I have called the France of the South is well placed to dominate India, Maluku, China and the Southern Ocean. Apart from wood, we will probably find crystals, diamonds, rubies, sapphires, emeralds and other precious stones.”

In fact they were exaggerating somewhat, as they had only caught a tiny glimpse of the land through the rain and snow. The King was convinced and launched another campaign with scientists, botanists, geologists, soldiers and future settlers to get to these islands again on 14th December 1773. For 25 days, the two vessels Le Roland and L’Oiseau led by Yves de Kerguelen were unable to get close, so the discoverer returned to Brest without completing his mission, which was supposed to see him sail to Australia and Cape Horn. Yves de Kerguelen went before the war tribunal and was sentenced to six months in prison and kicked out of the Navy. Three years later, James Cook confirmed that these huge lands were in fact a tiny group of islands and not a fifth continent.

Only a few whale and sea elephant hunters headed to these islands. The New England Quakers went there to get oil for their lanterns. On 17th December 1792, the Nantucket whale hunters (Asia, Alliance, Hunter) anchored in Port-Christmas Bay that had been charted by James Cook sixteen years earlier. They buried the first body and returned with oil confiscated from a British frigate in the Caribbean. Captain René Decaen’s   La Petite Henriette was the first vessel to sail around the island in the Southern summer of 1820, but just returned with a weather worn brig and crew suffering from scurvy. In 1825, John Nunn was shipwrecked there when hunting whales. With three others men, they lived like cavemen feeding themselves on the flesh of elephant seals, sea lions, penguin eggs cooked in seal oil… they had to wait for two years to be rescued, but John stayed for two more seasons to finish his fishing campaign.

France only really took possession of the islands in 1893, when the war vessel L’Eure moored there for a few hours. These islands are so desolate that they inspired René de Semallé who made it a home for prisoners on hard labour. The idea returned in 1979 with an idea proposed by French MP Michel Aurillac... But the Bossière brothers were the only ones to establish themselves there in the thirties. They brought sheep and shepherds to the island, half of which died of boredom and the other half of malnutrition.

The landscape here resembles what the world looked like before man arrived. 3400 km from Reunion Island, 4800 km from Australia and 2000 km from Antarctica, these volcanic islandc scattered across the Southern Ocean are swept relentlessly by winds and an extremely heavy swell, which shakes the foundations. No tree has been able to withstand these conditions.

The islands with a surface area of 7200 km2 include Grande Terre (6700 km2) with the volcanic peak of Mt Ross (1850 m) and is surrounded by a myriad of small islands and rocks. The rocky fjords where the wind howls averaging twenty knots throughout the year and recorded up to 120 kts offer shelter to many of the sub-Antarctic species. This is the kingdom of birds and sea mammals, who gather in their thousands each summer during the mating season. Yellow-beaked albatrosses with black eyebrows and sooty sheerwaters, as well as most varieties of petrel, establish nests there and the black browed albatrosses set up home on the rocky slopes.

Impressive flocks of penguins (King, macaroni and gentoo) colonise the valleys and you can hear their cry day and night around the cliffs and rocky slopes covered in stinking guano. The coasts are covered in long strands of shiny kelp, in amidst which sea lions and sea elephants swim. Not far from there, groups of whales patrol the waters… For two centuries seal hunters hunted here looking for oil and fur. There was a horrible massacre carried out and in the early twentieth Century, when sea lions, sea elephants and seals were almost made extinct.

In the centre of the main island, there is a succession of hills, lakes and valleys with waterfalls and icy torrents. In the distance, the ice on Mount Ross sparkles in a blue light in the ever-changing skies. In the heart of this uninhabited area, France set up a scientific base in the most sheltered bay in the east: the Gulf of Morbihan, named like its sister in Brittany because of the number of small islands. Bird watchers, biologists and geophysicians… take it in turns here year by year to carry out applied and fundamental research at the Port-aux-Français station set up in 1950. Some of them are so charmed by this wilderness that they try to get posted there as often as possible. 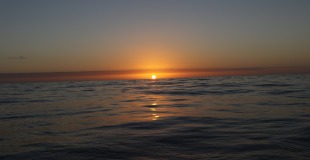