Home News The big blow is on its way

A deep low will be shaking up the pack for a number of days, while the leaders put the Kerguelens behind them and gradually climb back up towards Australia. The weather is worsening in this wide open space around the islands in the Southern Ocean.

Trindade, Martim Vaz, Tristan da Cunha, Gough, Marion, Prince-Édouard, Crozet, Kerguelen, Heard, and later  there will be St-Paul and Amsterdam. These islands are one by one being left in the wake of the 25 Vendée Globe skippers still racing. By the weekend, the whole fleet will finally be in the Southern Ocean, but it is a long procession of boats going by these islands with practically 5000 miles between the leader, Armel Le Cléac’h (Banque Populaire VIII) just 50 miles NW of the Kerguelens along with Alex Thomson (Hugo Boss) fifteen miles or so leeward of him and Didac Costa (One Planet-One Ocean) 400 miles SE of Martim Vaz… The Catalan sailor who set off from Les Sables d’Olonne four days after the start is now right behind Sébastien Destremau (TechnoFirst-faceOcean) and should go by him this weekend when they enter the Southern Ocean. 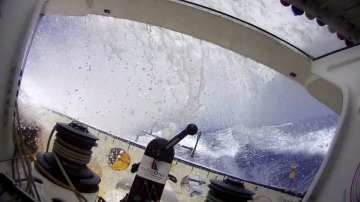 © Kito de Pavant/ Vendée GlobeWhile the first ten boats were scattered by the St. Helena high, further back the pack seems to have been thrown back together, as between Louis Burton (Bureau Vallée) and Éric Bellion (Commeunseulhomme) there are just 200 miles, or in other words half a day’s sailing. At least if there is a strong wind, which is what is set to happen. This should start to see them stretch out again depending on how much Neptune throws at them. A 35-40 NW’ly is forecast for this afternoon with the American, Rich Wilson (Great America IV) the first to be affected.

This forecast means that war is about to begin in the Atlantic with fifty-knot squalls, mountainous seas and darkening skies. A nasty cold front is moving in from the west at around fifteen knots, which means that the pack will gradually be affected until they enter the Indian Ocean. They must avoid getting engulfed by this system and try to stay on its northern edge between 35° and 37°S, as further down, there will be 55-knot winds off Tristan da Cunha.

Once this low has sunk into the depths of the Antarctic, a second even livelier low pressure system will take over below the Cape of Good Hope in the middle of the week. And then a third, which looks like being slightly quieter, but which could lead to the seas being whipped up in every direction around Marion and Prince-Edward Islands. NW’ly waves with a SW’ly swell in the warm Agulhas current coming down from Mozambique with the Ice Wall limiting their route to 43°S… In short, the men and their boats will be experiencing extremely tough conditions in these icy, strong SW’ly winds… 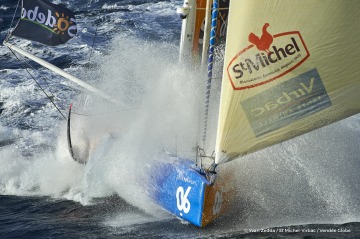 For those in the Indian Ocean (plus Kito de Pavant, who is due to enter on Thursday evening), the situation is very different four days in front, as the ocean has been half asleep. The Mascarene High is gradually building at 30°S to the north of the Kerguelens after a tropical low from Madagascar has gone by. Fast moving, it is getting ahead of the two frontrunners close to the islands, who won’t be able to take advantage of it. After a welcome front with 20-25 knot NW’ly winds, moderate westerlies should propel the leaders along the edge of the Antarctic Exclusion Zone. They have no real choice but to follow this border back up to 46°S, towards Cape Leeuwin, which they should have passed by the end of the weekend.

Sébastien Josse will have to remain patient until tonight for a powerful NW’ly air stream to replace the moderate westerly flow between Crozet and the Kerguelens. Once again, the skipper of Edmond de Rothschild finds himself in a transition zone, which means he is set to lose another hundred miles from the frontrunners today. However, he has managed to keep the two chasing boats in check. There are just eight miles between Jérémie Beyou’s foiler (Maître CoQ) and the boat that won the last edition of the Vendée Globe, Paul Meilhat’s SMA.

The big loser in all this is Yann Éliès (Quéguiner-Leucémie Espoir), who gave up a hundred or so miles to those ahead and more than 300 to the duelling boats out in front. Finally the gang of three, which entered the Indian yesterday, has seen the low, which took them to the Cape of Good Hope, get away from them. Jean Le Cam (Finistère Mer Vent), Thomas Ruyant (Le Souffle du Nord pour le projet Imagine) and Jean-Pierre Dick (StMichel-Virbac) are sailing in a SW’ly air stream, which is weakening ahead of the low pressure system moving across from South America to push the pack forward… 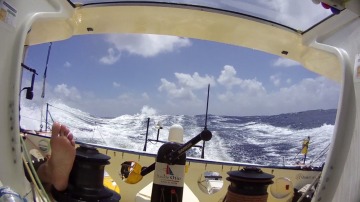 © Kito de Pavant/ Vendée GlobeKito de Pavant (Bastide Otio): Yesterday I was treated to a quiet day. Sunshine, light winds, calmer seas and a deck that was more or less dry. It’s true that it’s not that warm for late November (= late May back home). To be honest, I even had to put the heater back on. I managed to get some rest. Had a good nap. Slept a bit too long this morning as I found it hard to open my eyes... I did have plenty of manoeuvres to do because of the light conditions. Getting up a few extra square metres, but then had to bring them down again, when the wind got back up. Gybed several times to get back on track... This morning, it’s dull, dull, dull. And I can’t see any birds in my wake.” 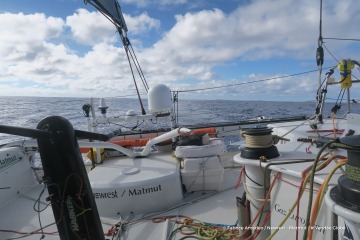 Fabrice Amadeo (Newrest Matmut): “I'm south west of the centre of the high pressure which I'm very happy about because it was a big challenge over the last two days to get around this and get more wind. Finally we're on the road to the Cape of Good Hope. We're waiting for the first low pressure from the south. The wind will increase gradually in the next 24 hours. I'll have to change my sails tonight from the big gennaker to the small one and perhaps put two reefs in the mainsail. Tomorrow I'll have more wind as the low pressure arrives, perhaps 40 knots. There'll be difficult moment tomorrow when the front arrives. The music I listen to depends on the conditions  in that moment – when it's calm I like to hear Tracy Chapman or the Eagles, when I'm in competition mode I like Eminem or other rap music, and for other conditions I like the Rolling Stones and pop music.”

Colman: all on from now on