French sailor Kito de Pavant last night became the tenth skipper to pass the Cape of Good Hope and cross from the South Atlantic into the Indian Ocean. The 55-year-old, competing in his third Vendée Globe, passed the longitude of 018°29.85'E at 2110 UTC, completing the passage from start port of Les Sables d'Olonne in France in 25 days, nine hours and eight minutes.

Bastide Otio skipper de Pavant, from the Occitanie region in south-west France, took just over a week longer to sail the passage than race leader Alex Thomson on Hugo Boss. At the Cape of Good Hope, on the tip of South Africa, he was just one day and 22 hours behind ninth placed Jean Le Cam, his closest rival, but it is a lonely position to be in - the leading group is some 2,800 miles ahead of him with the pack 700 miles behind.

And what has been a relatively benign entry to the Indian Ocean could soon turn more testing with big breeze predicted just a day or so down the track. “I’ve done it - Good Hope and Agulhas are behind me,” de Pavant said this morning. “The Atlantic is really big, especially when you go all the way down and across it. The Indian Ocean should give me a quiet day before it shows its true face, when it gets angry. I’m expecting some difficult days ahead. For the moment the westerly wind is variable in strength, but remains stuck in that direction unfortunately, as this is forcing me to carry out a lot of gybes and take in or shake out a reef very often without really making much difference to my average speed, which remains desperately low in comparison to what my friends are seeing.” 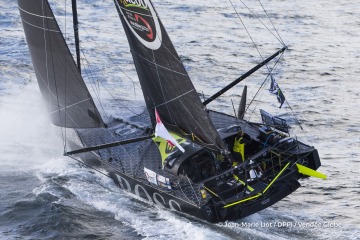 At the front of the fleet Thomson's lead has grown to 15 miles overnight as he makes the most of being on starboard tack, the one that allows him to use his remaining foil and therefore reach the full potential of Hugo Boss. Thomson was this morning making 17 knots just 12 miles from the Antarctic Exclusion Zone with second-placed Armel Le Cléac'h 15 miles to the north west. The leading duo are around 1,000 miles from Cape Leeuwin in the east of Australia, and should pass the longitude of the landmark this weekend. 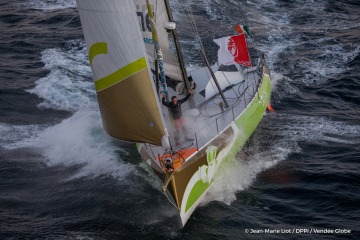 Around 4,000 miles west of the leaders the majority of the fleet still in the Atlantic Ocean have been experiencing their first real blow of the Vendee Globe. Irish skipper Enda O'Coineen has overtaken Alan Roura into 21st place after the pair passed the remote South Atlantic island of Tristan de Cunha. “Before Tristan, which we passed with 30 knots plus of wind, two reefs in the main and no headsail, the 'new reality' on board Kilcullen Voyager Team Ireland kicked in,” O'Coineen reported. “One surf down a wave brought us above 26 knots - that's 40km an hour! I also foolishly got soaked wet, when engulfed by a wave while struggling on deck. It took almost 2 hours to shorten sail and I had to hunker down on all-fours and crawl forward to the bow to solve a roller-furling problem. One moment we would rise, ride a wave and you feel on top of the world, and then a massive surge where you are planted between two walls of water.” 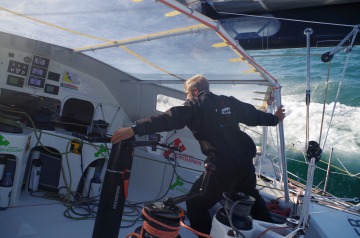 © Olivier Bourbon / M&MYann Eliès (Queginer – Leucémie Espoir): “I’m going to have to do a lot of thinking to work out how to deal with the storm on Sunday. I can’t continue on my ideal route. I can’t get ahead of it. I may have to slow down and let it go by. I have to get the timing right. Not too late or too early to hop onto the train. I’m afraid Paul and Jérémie will make their getaway.”

In the Forties, the roaring is about to begin