The passing of another year might not be high on Conrad Colman's list of concerns as he races solo through the South Atlantic in the Vendée Globe, but the Kiwi skipper still managed to mark his 33rd birthday in his own particular style – with beansprouts and dehydrated ice cream.

Colman is one of two skippers whose birthdays take place during the solo round the world race, the other being Spaniard Didac Costa on December 22. Speaking live to Vendée Globe HQ today Colman said his wife Clara had given him a special box of food to open on his birthday. “I'm celebrating my birthday by doing the Vendée Globe, it's been a dream of mine for a long long time,” he said. “I'm also celebrating by eating salad. I've been looking forward to it the past few days. It's made up of beansprouts, and I'm really excited to have fresh salad onboard. My wife also made me a special birthday food box containing some crusty dehydrated astronaut ice cream, which actually tasted terrible. So I'm happy just to have my beansprouts and to have a nice sunny day.” 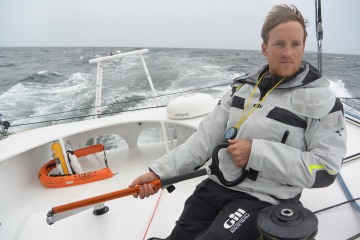 © Stéphanie Gaspari - Groupe BelCurrently in 13th on Foresight Natural Energy, Colman revealed he had enjoyed a magical moment onboard on the eve of his birthday as he rocketed through the South Atlantic surfing the waves in winds of up to 35 knots. “There have been lots of contrasts over the last few days – last night I had gusts of 35 knots and the boat was doing 25-knot surfs,” he said. “I was stood on the back of the boat under a clear sky, clipped on leaning back into my harness, just really enjoying the moment. It's taken me years and years of work to get here and I was just soaking it up surfing down the waves in the black. Today it's the complete opposite, a sunny day with eight to ten knots of wind and the full main and big spinnaker up. There's a little bit of everything in the Vendée Globe.”