Vendée Globe skipper Thomas Ruyant had his stricken IMOCA Le Souffle du Nord pour le Projet Imagine hove to, so slowed right down with the headsail backed and his mainsail down, as he rode out the worst of the weather, before heading the 200 miles towards Bluff, the southernmost town of New Zealand.

Race Direction have been in regular touch with the sailor, who has been under engine, and with Laurent Bourgués, technical director of Le Souffle du Nord, monitoring the situation. Ruyant has an ingress of water, a broken starboard rudder, damage to a ring frame, cracking in the deck. Stephane Le Diraison who broke his mast has set a jury rig with his boom and is making around six knots towards Melbourne which is eight hundred miles ahead of him. The two race leaders (Armel Le Cléac’h on Banque Populaire VIII and Alex Thomson on Hugo Boss) are now sailing in entirely different weather systems, split by a ridge of high pressure. Thomson is compromised on port tack and unable to use his damaged starboard foil. Armel Le Cléac’h has passed the symbolic 500 mile barrier over the British sailor. Latest routing predicts the Frenchman will reach Cape Horn two days earlier than his closest rival. 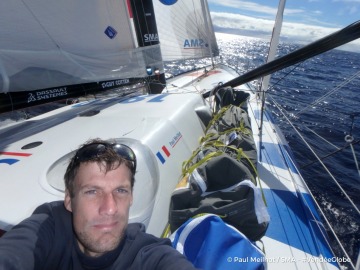 Paul Meilhat (SMA) and Jérémie Beyou (Maître CoQ) are 30 miles still fighting each other for third place with a slight advantage for Paul Meilhat this morning They appear to have made it out of the transition zone, but are likely to lose a large part of their lead over the trio comprising Yann Eliès (Quéguiner-Leucémie Espoir), Jean-Pierre Dick (StMichel-Virbac) and Jean Le Cam (Finistère Mer Vent), who are now only 600 miles behind them. It seems possible that this gap will be cut in half by Cape Horn with much more favourable weather for the trio behind. Latest routing simulations show they will only be a day behind Meilhat and Beyou which means that the battle is still on for a place on the podium.

In the rest of the Top Ten, things are going well for Louis Burton (Bureau Vallée) and Nandor Fa (Spirit of Hungary), who are now in more manageable conditions. Arnaud Boissières crossed the longitude of Cape Leeuwin yesterday evening in 13th place. In thethousand miles behind La Mie Câline, the fight is on as they make their way towards Australia with in order Fabrice Amedeo (Newrest-Matmut), Alan Roura (La Fabrique), Enda O’Coineen (Kilcullen-Team Ireland), Rich Wilson (Great American IV), Eric Bellion (CommeUnSeulHomme) and Pieter Heerema (No Way Back). The Dutchman is sailing at thirteen knots a little over 1100 miles from the second major cape. When he spoke yesterday to Vendèe LIVE, Heerema sounded in much better spirits, confirming all is now well on board his No Way Back and he will retain his conservative route, north of 40 degrees to avoid the worst of the weather to his south.

There is no need to worry about Conrad Colman’s absence from the rankings this morning. Foresight Natural Energy was not spotted last night at 2100 UTC or this morning, but all is well on board apart from the beacon not sending his position. Conrad informed the Race Directors that he is trying to find a way to send his position again and hopes to solve the problem shortly. For the three at the rear, Didac Costa (One Planet One Ocean), Romain Attanasio (Famille Mary-Etamine du Lys) and Sébastien Destremau (technoFirst-faceOcean), it was a rough night, as they probably encountered 50-knot gust, but the worst of the weather is now behind them and conditions are improving. 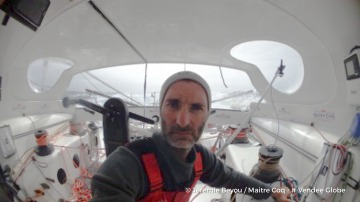 Jérémie Beyou (Maître CoQ): “I understood that things were not going right, when I missed the train that Armel and Alex caught in the South Atlantic. I had told myself before that I could make it. But just because you punch your ticket correctly doesn’t mean you won’t miss your train. Pushed along by a decent SW’ly air stream, SMA and Maître CoQ ran into the low which is blocking their route ahead. We tried everything – going around via the north, sailing high, and we ran into it again. Nothing worked. Then this morning, the gates opened. I came out of a raincloud and found sunshine and 20 knots of wind. I have been looking at my route and can see my detour, all the extra miles and low speeds over the past few days. In the end the toll was high. There is no point in running like crazy, as we saw in La Fontaine’s fable (The Tortoise and the Hare). I have seen what happens if you do that and will probably see it again. But maybe before the end of the race, that lesson will apply to my friends out in front. As for Armel, it’s as if Mother Nature left all the doors open for him” 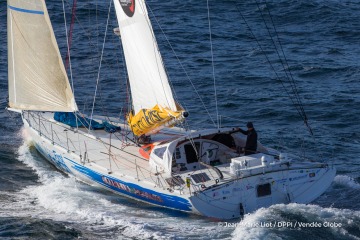 Sébastien Destremau (TechnoFirst-faceOcean):”The wind is still blowing between 30 and 50+ knots and the sea state goes from manageable to scary in a matter of a few miles. Following yesterday’s chaotic day, we have decided to head north-east. The wind and more importantly the sea state should be much better from tomorrow the 20th onwards. The repair that needs to be done at the head of the mainsail is very simple but it cannot be done in this kind of weather. It is just a matter of reconnecting the head of the sail with the car on the mast. You align everything and put a pin in. Job done. However, even with the sail on deck, the top on the main is very high and it’s impossible to work up there on such a jumpy boat. Today's job is to replace both runners by new ones.” 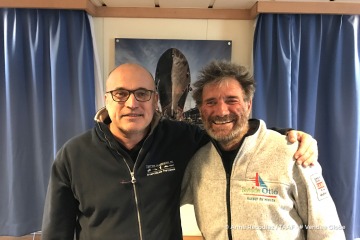 Kito de Pavant (Bastide-Otio, ABD): "I’m still aboard the Marion Dufresne. It was a rough night with a 40-knot westerly wind and heavy seas. The Marion Dufresne rolls from side to side and everything goes flying in the comfortable cabins. No one slept well as you really had to hang on to the mattress...We passed in front of the route taken by Romain (Attanasio) and Sébastien (Destremau) and probably close to the upturned hull of Bastide Otio, but we didn’t see any of them. We’ll be getting to Amsterdam Island tomorrow afternoon.”

Le Diraison to Australia, Colman at Leeuwin and in the Court of King Jean