While Banque Populaire VIII is back in tropical latitudes, several competitors are facing very tough conditions in the South Pacific. 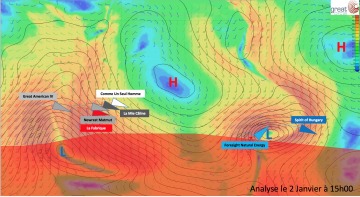 © Great CircleTwo depressions are affecting the competitors in the South Pacific. Rich Wilson was the first one to sail in the trough of a depression coming from New Zealand. It was well forecasted by the models and the group made up of Eric Bellion, Fabrice Amedeo, Arnaud Boissières, Alan Roura and Rich Wilson sailed northwards for 2 days to avoid the strongest winds. Four other competitors are likely to be affected by the front within the next 24 hours.

For Nandor Fa and Conrad Colman, the depression they are sailing in  does not completely correspond to the weather models from yesterday. It is more active and slightly further east than expected, which has complicated the task of the Kiwi skipper. Winds are blowing in a range from 45 to 55 knots with gusts in the 70s until 1700hrs UTC in the Southwest quadrant of the depression, which is the exact place where Conrad was early this afternoon. Conditions should then improve from the 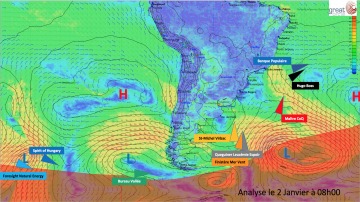 © Great Circleend of the day. These are probably the hardest conditions encountered by a competitor so far in the 2016 edition of the Vendée Globe. For Nandor Fa, conditions are not much better. The wind is not as strong as for his former crewmen in the Barcelona World Race, but the direction is not comfortable. The wind angle to the boat is about 90° and the speed probably around 40 knots with gusts of more than 50 knots.

In the Atlantic Ocean, Banque Populaire is now back in tropical latitudes and should be soon sailing in the trade winds. Armel Le Cléac'h will be followed by Alec Thomson and by Jérémie Beyou who has another transition to deal with before being able to sail in a Northeasterly wind.

For the trio made up of StMichel-Virbac, Quéguiner and Finistère Mer Vent, the depressions are following one another at the rate of one every 36 hours, which requires a lot of attention. 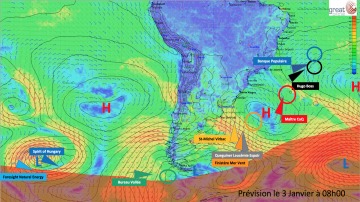