With a lateral gap of 972 miles, phosphor IST in the West and Tonu76 in the East, the two utmost separated virtual skippers and their sidekicks will have to face diametrically opposed weather systems. For the western gang, crossing the Equator should be rather easy.

A good SW flow is currently pushing this flotilla due North. 220 NM away of the frontrunners, the Equator will be crossed tonight. As for the Doldrums, they won’t be very active, but the competitors will be facing a NE’ly wind impeding them to head towards les Sables d’Olonne. They will have to make a big detour to get downwind again. It’s a very much longer route with fewer calms.

By contrast, for the eastern sailors, the Doldrums, which are quietly moving westwards, will become wider; it won’t be more glorious afterwards either. One will have to wait till Sunday or Monday to find better conditions again. The latecomers will be able to sail better and catch up with the becalmed leaders.

A tiny exit door towards the North should open in the next week for the virtual skippers who are more in the middle of the Atlantic Ocean. To make it short, as you will have guessed, the Northern Atlantic Ocean will not be tamed so easily. At this morning’s ranking, Enez Venam is leading ahead of Tonu 76, who just jibed to gain westwards, and Beluga 10.

As told here above, the players are positioning themselves before crossing the Equator. It’s a race against the clock to try to find the right path and anticipate the Northern Atlantic Ocean’s lows and highs. At the Atlantic Sprint ranking, Jérémy6 is still holding the lead and the gaps are slightly increasing.

Hi boss... When we will have in VR a tool to get the distance? Bye&Tnx

Just want to say hello,I wish you HAPPY New Year, and all the best things in this one, to your family, and all sailors arroun the world,,,,,

Minor changes in speed produce major changes in the line that projects the position, 0,1 knots changes 14 miles. Is this a bug?

Good thing that the name is Atlantic Sprint and not Atlantic Fast ; I have not a option clue between dead clams and close hauling; I do hesitate. Well, let’s play : head dead calm, nail close hauled, or the contrary J ; it’s great. Fair winds to all !

VR News, we’re already on different routes. We’ll see in some days who was right! I keep an eye on your boat, in case of!??? 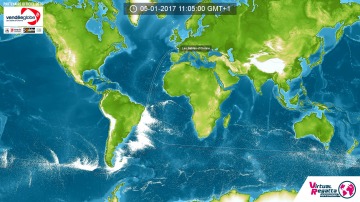