Ten days since his world quite literally came crashing down around him, Irish skipper Enda O'Coineen says he is still contemplating his next move.

O'Coineen's 2017 got off to the worst start imaginable when Kilcullen Voyager Team Ireland dismasted on New Year's Day 180 miles south east of New Zealand. The violent Southern Ocean squall to blame ended O'Coineen's Vendée Globe dreams in an instant, and the 61-year-old had no option but to cut the entire rig free. Rather than calling for help he fashioned a crude sail from the broken pieces of his boat and headed towards New Zealand, where he was eventually picked up by a fishing vessel. Now, more than a week after the disaster, O'Coineen says he is finally coming to terms with his shattered dream and has begun weighing up the options of a next move. “Only the French would dream up such a mad crazy race, such an adventure, and lure and innocent young Irishman into it,” said O'Coineen, who found safe haven in Otago Bay in Dunedin on the southern tip of New Zealand's South Island. “How do I feel about it? It's been an adventure, a challenge, and I feel privileged to have been able to do it. I took risks, I accept that, and I'm responsible for my own destiny. I'm proud I didn't call the rescue services. It's an emotional bomb, really, but that's life – you get kicked in the arse, you fall down and you get back up again. We're making plans for the future and let's see what happens.”

Since arriving in Otago Bay last Friday O'Coineen has been inundated with offers of support from  locals, and has had camera crews lining up to interview him. “I'm a bit isolated here in one of the remote parts of the world but the people have been great,” he said. “I was front page on the local newspaper – me, together with a big story about the local penguin population. Not a lot happens here!” The question remains as to what O'Coineen will do with his wounded IMOCA 60. One option is to ship it back to Europe alongside Paul Meilhat's SMA, another to refit it and sail it home. He's even had an offer from a Kiwi sailor to buy the boat in its current state. “I haven't made any final decisions yet,” he said. “I'm not in a massive rush – my family don't expect me back for a while! It's tempting to get a mast and try to sail the boat home but that's a huge logistics effort in itself. So I really don't know – the ball is in the air.” 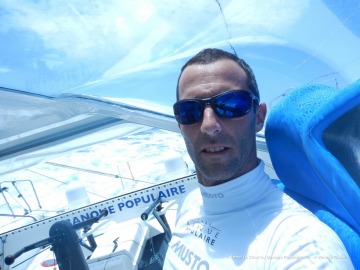 Meanwhile on the racecourse leader Armel Le Cléac'h has been working hard to defend his slim lead from the relentless attack of second-placed Alex Thomson. This morning the leading pair were 91 miles apart, the gap growing by 30 miles in the last 24 hours. Jérémie Beyou in third will cross the Equator today to join Le Cléac'h and Thomson in the northern hemisphere. At the 0400 UTC report he had just 35 miles left to sail, and was still around 24 hours ahead of the time set by Vendée Globe winner François Gabart in the 2012-13 race. Eric Bellion and Conrad Colman in ninth and tenth are due to round Cape Horn tomorrow. Commeunsuelhomme skipper Bellion remains the fastest in the fleet over the last 24 hours, and the only one to notch up more than 350 miles. Caught in the centre of a low pressure system, Dutch sailor Pieter Heerema was this morning down to just eight knots of boat speed.

Tune in to Vendée Globe Live at 1200 UTC where presenter Will Carson will be joined by British sailor and 2008 Vendée Globe competitor Jonny Malbon.