> News > WHICH FRENCH DEPARTMENT HAS THE MOST VIRTUAL VENDÉE GLOBE PLAYERS?

They are 96 departments in France. To which one goes the palm for the players' biggest number? For this 2016-2017 edition, the Loire Atlantique (44) seizes the lead with 46239 players. Then come Paris (75) with 40,676 competitors and, far behind, the Vendée (85) with 22,652 virtual players. Paris is therefore the French - non-seashore – department, which plays the most, the Maine et Loire (49) being second with 15,522 players. The Finisterre (29) is the first Breton department, ahead of l’Ille et Vilaine (35) and the Morbihan (56). Behind the Bretons, the Hauts de Seine have 12,281 players and are ahead of the Gironde, the Côtes d’Armor and the Yvelines. The Nord (59) is 13th, just ahead of the Bouche du Rhône (13), first Mediterranean department. The Lozere (48) is bringing up the rear, but still have 281 players. Do not forget that within the different game’s rankings, you may know your rank compared to the players of your department. It’s up to you now…

With more than 450,000 are on the planet’s oceans, several thousands of you are currently sailing the Atlantic Ocean upwards, towards the Sable D’olonne. With still 2,241 NM to sail before the finish line, the leaders are expected in the Sables within one week, around January 17th. Still at the top, didflam is leading a small gang of players on a due North heading. They however will have to go much higher than the latitude of the Sables d’Olonne because they’ll have to sail around a low-pressure area. The leaders, pushed by a 17 knots wind, are currently in the northwest of Cape Verde archipelago.

Two groups are fighting for the Atlantic Sprint top position. The first one, in the south of Cape Verde, is currently holding the advantage while, in the West of the archipelago, others are on a quite interesting due North heading. There is a 100 NM gap between the two. With still 2,267 miles to go, it won’t be such a log way and as for the Virtual Vendee Globe, ETA is forecast within one week. 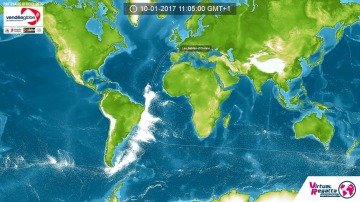