The flow of arrivals will intensify over the time but today at noon, about 280 sailors have already validated their race. As shown on the 11:05 a.m. satellite view, a group of 700 to 800 players should finish today, but then a continuous players’ flow will bloat the general ranking. At the end of this 72nd day of race, 158,000 players are in the Northern Atlantic Ocean. 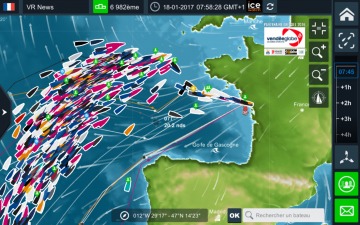 The Irish virtual player is right now crossing the Equator and is entering the last big chunk of the Virtual Vendée Globe. The rest of the fleet is sailing in the Southern Atlantic Ocean, with a big number of rivals currently blocked by the Saint Helena High that is one more time thwarting the sailors. At Cape Horn, there are surely less players than some weeks ago, but the mythical rock is still the scene for lots of passages. A bit further in the Southern Pacific Ocean, some thousands players are enjoying down winds to dash towards Cape Horn. The multitude of players is still scattered over the globe but all have the ultimate goal to loop the loop by coming back to les Sables d’Olonne. See you tomorrow for a more detailed brief about the different rankings and to know the position of our certified sailors.

A big thank to the designers of this virtual game. The 3D images are fantastic. It almost feels like jumping onboard! Kudos

Hello VR News, I’m the skipper of  "le Revenant". Congratulations to the development team; the excellent 3 D graphics increases the realism. My ETA is on Wednesday at 10 a.m.

All the best for the rest of the fleet and see you in fours years time.

The end of the Vendée Globe will leave a big void. It has been the opportunity to meet nice people and by lack of VHF, we exchange via the messenger. But it’s not time for nostalgia, we still have some miles to make the difference. Kudos one more time to the organisation for this wonderful simulation!!

I took the start on your stand, in the staring village in Les Sables. A bit late when entering the southern seas, now I’m 25th at the begin of the final straight… It’s my 3rd Virtual VG and I do thank you to have opened this game to everybody. Before, one had to be IT specialist to win… Now it’s different. There is no need anymore to log in at fixed schedule.

One plays as he like, as he can. It’s been hard to understand at the beginning, then, finally, one gets used to it.

At the bottom line, I do regret to have missed the start. Because I was 2 days behind the leaders at Cape of Good Hope…

By any means, thank you.

A quick Hi… I definitely became a fan of VR. Greenhorn on Nov the 6th, and now I’m on the three current races. Fair winds to you; we can’t get apart anymore. So, what do you think: shall we pass in the East or the West of Cape Verde?

It’s getting clearer on the Atlantic Sprint.

195 miles away from the finish line and with an 18 miles lead, Koenigswell will have to sail tight to win this sprint. On a medium interesting course and closer to the direct route, he’s still under the threat of the northern group, which has a better angle of attack. The winner of this race should be known in around 12 hours. At provisory general ranking, like on the Virtual Vendée Globe, the Top 10 is very international, with one German, two Swiss, one American, one Irish and four Frenchmen.

Thanks to you all for your messages.Embark for the virtual race around the world! Join us at: http://www.virtualregatta.com/