While a continuous flow of players is crossing the finish line in Les Sables d’Olonne, some certified sailors are about to end up this virtual circumnavigation, as Loïck Peyon, currently on his way to welcome his friend Armel Le Cleac’h in Les Sables d’Olonne “ I really had a excellent time with the Virtual Vendée Globe game. It’s not the first time I’m finishing it, but this new version is incredible. The reality perfectly matching weather systems and the 3D viewer plunging us into the real conditions are truly contributing to the success of the game. All that’s missing is the sound on the boat. What’s particularly interesting is that the whole Artemis Racing sailing team (America’s Cup Swedish challenger) is sailing practically side-by-side off Brittany. Even Nathan Outteridge (Olympic Games Gold medallist on 49er and Artemis Racing’s helmsman) is on the game. There is a competition within the competition. I also love the international podium with an Aussie, a Kiwi and a Frenchman. It’s really a plus for the game, as is Alex Thomson’s runner's-up spot in the Vendée Globe.”

A bit further, approaching the Azores, Estelle Denis is fighting to recover the ranks lost during the Southern Atlantic Ocean climb up. “I’m sick, I did not well manage my race since Cape Horn. The choices were not good, but now I’m gaining ranks little by little. I crossed the Equator 100,000th and now I’m 80,000th. I’m aiming to overtake my mother at any cost. I think I will pass in the West of the Azores to get a very beautiful Low that should bring me to the Sables D’Olonne. Kudos to the two Vendée Globe’s leaders! I have a huge respect for what they’re achieving.” 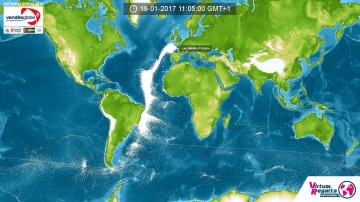 Closer to the finish line, Mat Kusznierewicz is tempting an close-hauled option thru Cape Finisterre, while, off Brittany, Yves Le Blevec is at the latitude of the Pointe du Raz. Michel Bayle, on his side, has tacked few hours ago and is heading towards Les Sables at the latitude of the Channel Islands. Xavier Rohart, as for him, is on a northbound course towards the Channel and should tack in the end of the afternoon. In short, there are lots of people today at Brittany’s tip and the virtual sailors are on almost the same course towards Les Sables d’Olonne than the two Vendée Globe leaders.

With a total race time of 15 days, 16 hours, 12 minutes and 7 seconds, KLM2235 wins the Atlantic Sprint. The players have been less fast than on the Virtual Vendée Globe, but the sailing has been of utmost interest on this climb up. Many players have held the top position, but at the end, KLM2235, one of the big actors of the race around the world, wins here a nice victory.