> News > The Kerguelen Islands, a privileged place for many oceanic animals

The study of animal populations, living in extreme regions, and their migratory trajectories is only possible from space. Argos satellites system imagined by worldwide space agencies and operated by service companies such as CLS come into play. Each month, CLS tracks more than 8,000 animals per satellite on behalf of the scientific community through the Argos satellite system.

Kerguelen Islands in sight for @VendeeGlobe skippers! But the biggest French glacier is tragically reducing ... 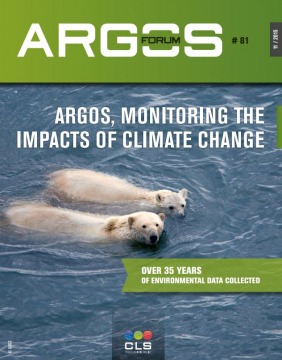 © ©CLS / VENDEE GLOBEChristophe Guinet has discovered that global warming shifts the elephant seal’s feeding zones to deeper waters. These mammals therefore spend more time and energy in diving for food. Consequently, the females build up less reserve, and give birth to offspring that are less equipped to face life’s challenges. They also wean them in worse conditions. As a result, mortality rates could reach 70 to 90 % in unfavourable oceanic and climatic conditions.

Charles-André Bost has placed nearly 200 Argos transmitters on king penguins, and his conclusion is clear. Using data collected from the Argos satellites, scientists have established predictive models which show that if man continues using fossil fuels as he does today, king penguins will have disappeared from the north of their distribution area (Crozet and Marion islands) by 2100. This disappearance would be a dramatic loss for the biodiversity of these regions. It would also entail the loss of a link in the food chain, with a still unknown impact on the Southern Ocean.